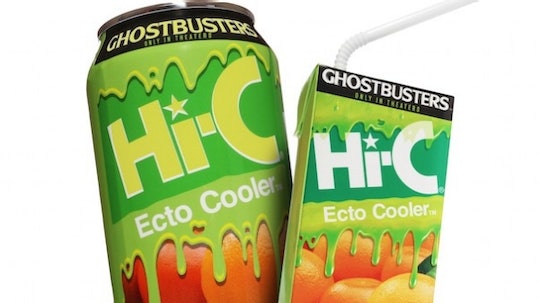 Courtesy of the Coca-Cola Company

Hi-C Ecto-Cooler Is Coming Back For 'Ghostbusters,' & Kids Will Love It

Generation X and Millennial moms are about to find themselves really conflicted. While it may go against our core beliefs to feed our kids anything that's not organic or locally-sourced, our generations are known to get nostalgic about something that happened just a couple of months ago (remember "Damn, Daniel"?). So when Hi-C Ecto-Cooler returns on May 30, who you gonna call? Slime-colored tangerine juice drink may not be what you had in mind for junior's lunchbox, but hey, we all turned out fine, and you know your kids are going to love it.

Originally conceived as a limited-run promotional tie-in with The Real Ghostbusters cartoon, Ecto-Cooler was a surprise hit, and the beverage enjoyed immense popularity from 1987 until it was discontinued in 2001. Fan sites and petitions sprang up begging for its return, and eagle-eyed consumers were quick to notice when Coca-Cola re-registered the trademark for Ecto-Cooler last fall. Was it just a coincidence, or could Ecto-Cooler really be coming back, perhaps as a tie-in with Paul Feig's Ghostbusters reboot? Well, wonder no more; it's really, truly, coming back. Although the new packaging is strangely missing Slimer (especially weird, given that he appears in the trailer for the reboot), they're making it up to us: in addition to 6-ounce juice boxes for the kids, a Coca-Cola press release states that it'll also be available in 11.5-ounce cans featuring color-changing ink for us parents (try it with Bacardi Limón!).

That's not the only change, though. The Street has reported that the recipe for Ecto-Cooler has been tweaked to contain fewer ingredients, including only one sweetener — high-fructose corn syrup. Um, how many sweeteners did it contain before? Deep breaths, remember, we all turned out fine. And according to the Mayo Clinic, despite the scary memes on Facebook, there's no evidence that high-fructose corn syrup is less healthy than other sweeteners. I won't be giving my kid Ecto-Cooler daily, but the occasional sweet treat is fine in moderation, and this will undoubtedly be a welcome addition to Ghostbusters-themed birthday parties over the summer.

Ecto-Cooler will be available "in select locations including major online retailers," and fans can enter to win their own 10-pack of juice boxes via Twitter or Ecto Cooler's Facebook page. Ghostbusters, starring Kristen Wiig, Melissa McCarthy, Kate McKinnon, and Leslie Jones, hits theaters July 15. I can't wait for either one, both as a fan, and as a mom.

Just one question remains: will the misogynists and self-proclaimed "purists" who've been railing against the Ghostbusters reboot be partaking in the new Ecto-Cooler, or do us ladies get it all to ourselves?