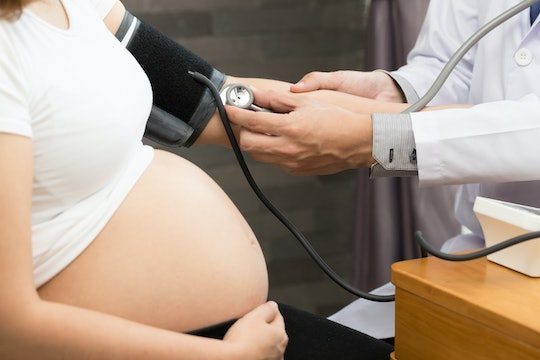 While doctors have long known the added risks that hypertension can bring to a pregnancy, a new study suggests that high blood pressure during pregnancy has become increasingly more common over the last 40 years. Researchers at Rutgers Robert Wood Johnson Medical School found that, between 1970 and 2010, rates of hypertension among pregnant women increased 13 fold. Additionally, researchers also found significant racial disparities, with black women reported to have rates of hypertension more than two times higher than white women.

Women have long been cautioned about the associated risks of hypertension, or high blood pressure, during pregnancy. According to the American Heart Association, chronic high blood pressure during pregnancy "can be dangerous for both mother and baby" as it increases a women's risk of stroke, cardiomyopathy, stillbirth, preeclampsia, infant death, and heart or kidney failure. In an effort to examine and identify trends in hypertension rates among pregnant women, researchers at Rutgers Robert Wood Johnson Medical School analyzed data pulled from the U.S. Centers for Disease Control and Prevention’s National Hospital Discharge Survey for 151 million pregnant women aged 15 to 49 who'd had delivery-related hospitalizations in the United States.

As part of their study, researchers also examined obesity and smoking rates among participants, as both obesity and smoking are known causes of high blood pressure. However, researchers have said they were surprised to learn that age appeared to have been a more significant factor. "We were a very surprised that the increasing prevalence of obesity and the declining prevalence of smoking rates had virtually no impact on trends in chronic hypertension during pregnancy," Cande V. Ananth, the study's lead author and professor and chief of Rutgers Robert Wood Johnson Medical School's Division of Epidemiology and Biostatistics in Obstetrics, Gynecology and Reproductive Sciences Department, said in a press release from the American Heart Association, which publishes the journal Hypertension.

Instead, researchers believe that age, and the fact that women are now opting to become pregnant later in life compared to 1970, has driven up rates of hypertension among pregnant women. "We found that mothers who were older when they became pregnant were more likely to have chronic hypertension," Ananth explained, according to the American Heart Association. "Since more women are electing to postpone their first pregnancies, and advanced maternal age is strongly associated with chronic high blood pressure, women should be aware of the risks associated with having high blood pressure during pregnancy."

Of course, obesity and smoking are still factors that can increase a person's risk for high blood pressure and this study's findings provide those looking to become pregnant, as well as medical professionals, with more knowledge about what factors could lead to this condition.