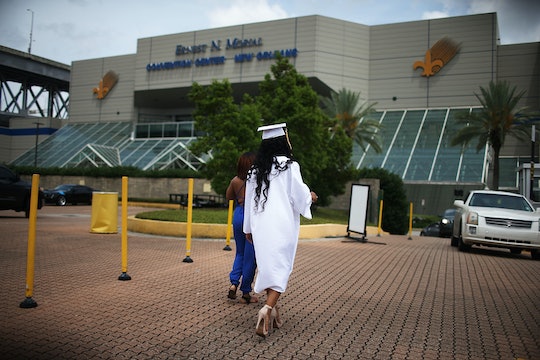 High School Graduation Rates Are At An All-Time High, But There's Still Work To Be Done

The rates were calculated by The U.S Department of Education's National Center for Education Statistics to determine what percent of the class of 2013-2014 graduated high school within four years. The graduation rate has increased significantly, and is up from 75 percent in 2005.

"When I took office almost eight years ago, we knew our education system was falling short," President Obama told students at the high school earlier today, according to NPR. "I said, by 2020 I want us to be No. 1 across the board, so we got to work making real changes to improve the chances for all of our young people... And the good news is that we've made real progress."

The president also talked about why it's so significant that more students than ever are reaching their potentials, according to NPR:

There’s magic in each and every one of you, and we just have to help you unleash it and nurture it and realize it. I’ve met so many young people around the country whose energy, and excitement, and how you treat each other, with respect. That gives me a lot of confidence, a lot of faith for our country.

The president also emphasized that although the high school graduation rate may be steadily rising, there is still work that needs to be done. For example, there are still noticeable racial disparities. While the graduation rates for black and Hispanic students are also at all-time highs, they are lower than for white students: for Hispanic students, the rate is 76 percent; for black students, it's 73 percent.

There is also a wide range of success depending upon what state you're looking at: Georgia's graduation rate has dramatically risen to 79 percent from 67 percent in 2010-2011, according to NPR.

Meanwhile, other states haven't turned around graduation rates quite as successfully: it's perhaps ironic that Obama made the speech at a school in the nation's capital that has one of the lowest rates of on-time graduates, at just 65 percent.

But perhaps this is why the president said that we need to be aiming to get the graduation rate up to a perfect score: 100 percent. Obama said, according to ABC News:

We've still got more work to do. As I go, I'm giving you kind of a final report card, transcript on what more we’ve got to get done. There are still too many states that are cutting back on public education. And part of the reason tuition is going up is because states aren’t putting as much money into state education, universities, community colleges as they used to.

With graduation rates at an all-time high, this gives young adults the best prospects at living prosperous lives: statistics show that high school dropouts earn far less per year and are more likely to be unemployed. So let's throw a huge graduation blowout for the four out of five young adults who earn their diploma!