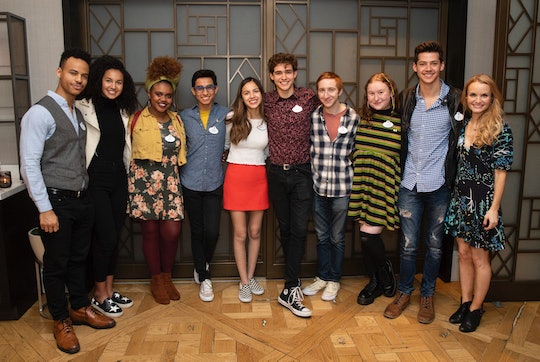 When High School Musical debuted on the Disney Channel in 2006, no one expected how big it would be. Three movies and 12 years later, the legacy of HSM has carried on in a huge way — not only is it so much fun to watch but the songs are still just as catchy. So, fans of the original film will love to hear that High School Musical is coming back as a TV show and it sounds like such a fun nod to the original material.

Everything old is new again — and that could not be any more true with the recent announcements about reboots of classic TV shows (ahem, Nickelodeon bringing back all your favorite shows from the 1990s). Not that this is a bad thing — it's exciting to look at your favorite childhood TV shows and movies through a fresh set of eyes and have the opportunity to introduce favorite characters to a whole new audience.

High School Musical: The Musical: The Series (yes, the title is really that long) will focus on a new group of Wildcats (from the same East High where the original takes place) who are putting on a performance of High School Musical for their winter musical, according to Seventeen, and the drama that ensues from it.

Yes, the show is that meta.

Because it's a slight cover of the original film series, this means that fans won't be seeing new faces play their favorites. Instead, there will be a whole new cast of characters with their own drama, according to a press release from the show. Fans will have the opportunity to fall in love with a "skate rat" named Ricky who auditions for the musical just to impress his ex-girlfriend — and Nini, a Broadway-obsessed rising star who is "fiercely loyal" to her two moms.

With this new take on the musical, which reflects life now in 2019, it will be a joy for fans of the HSM franchise to watch. And the people behind the show are just as excited. Senior vice president of content for Disney+, Agnes Chu, said in a press release for the show:

We are truly excited about this extremely talented cast and the fresh and contemporary take on this globally-beloved franchise. From the music and dance to the characters and hilarious meta references, there is something here for fans of the originals, as well as people who are new to East High. It's going to be an unforgettable experience to Disney+ subscribers.

However, there is a bit of time before this show premieres, as production for the show just started. But once it does air, people will not find this show on Disney Channel. Instead, High School Musical: The Musical: The Series will be premiere (and only be available to watch) on Disney+ — Disney's new streaming service (and Netflix competitor) which is set to launch in late 2019, according to Digital Trends.

In the meantime, fans can watch the original three movies over and over again (as if they aren't doing that already).