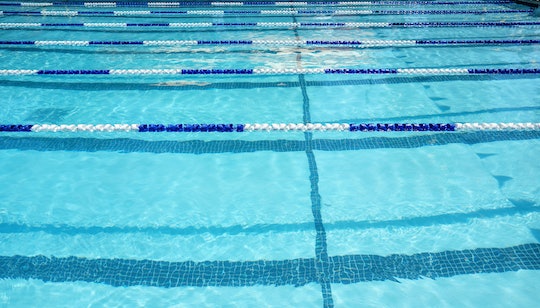 High School Swimmer Disqualified Because Her Team Swimsuit Was Too Snug

Being a teenage athlete is no easy feat, as balancing school work and practices require a lot of effort. You're challenged mentally and physically, so when something goes wrong where it should have gone right, worlds can be turned upside down. And that's exactly what happened to this high school swimmer who was disqualified because her team swimsuit was supposedly too snug. Needless to say, her disqualification has sparked controversy for a multitude of reasons.

A teen girl at Anchorage’s Dimond High School had just crushed her competition in the 100-meter freestyle. She knew she had won even before she got out of the pool, according to NBC News, but as she hopped out of the water, what awaited her wasn't a first place medal. As it turns out, she had been disqualified because of her bathing suit riding up, a school-issued bathing suit that was the exact same one worn by her teammates, according to The Washington Post.

A referee reportedly disqualified her because her swimsuit was supposedly showing too much of her backside, an occurrence that's better known as "swimmer's wedgie" which is caused by the high-cut standard-issue swimsuits riding up, according to USA Today.

This isn't the first time this particular swimmer has been targeted for her swimsuit being "inappropriate." A parent reportedly took a picture of the girl's backside and shared it with other parents to point out the supposedly incorrect fit of her swimwear, according to Jezebel. And on top of this, her mother has reportedly been approached by other parents asking that her daughter be more discrete for the “the sake of their sons,” according to Deadspin.

The teen girl's coach wrote an op-ed in Medium, condemning the school as well as the Anchorage School District for the disqualification. According to Coach Lauren Langford, the suits are sized-to-fit snug and are high cut to promote the least amount of water resistance.

Langford suggested that the teen, along with her sister, are being unfairly targeted because they are curvier and are of different races than their teammates.

"They are being targeted not because they are wearing their suits to be scandalous, thus inspiring immorality among other young people, but rather because their ample hips, tiny waists, full chests, and dark complexions look different than their willowy, thin, and mostly pallid teammates," Langford said in her op-ed to Medium.

She continued, "If you buy a suit for 70 girls, unless you have each individual suit tailored to fit, it’s going to fit every single body differently. All of these girls are all wearing suits that are cut the same way. And the only girl who gets disqualified is a mixed-race girl with rounder, curvier features.”

Many agreed with Langford's take, with one person writing: "This is straight-up BS. She's an athlete. She's there to compete, work hard, keep raising her personal best. You and your 'male gaze' need to be disqualified."

"Unbelievable," someone else said. "Women are marginalized enough for being female and all different shapes and sizes, but throw in race, and now it is even more revolting."

The Anchorage School District is aware of the situation and issued the a statement, an excerpt of which says:

ASD is reviewing the disqualification of a student athlete during the September 6 Dimond High School home swim meet. The disqualification appears to stem from a difference of opinion in the interpretation of the rules governing high school swim uniforms. Immediately after the disqualification, the Dimond HS swim coach filed a protest with the official to contest the decision.

The coach’s protest was quickly denied at the meet, and we expect the coach to appeal. We intend to gather all the facts surrounding the disqualification so we can accurately address the matter with officials and take appropriate action to ensure fair, equitable competition and consistent application of the rules for this athlete and her peers.

A call from Romper for additional information was not immediately returned.

For now, things are at a standstill as the decision is being reviewed. Swimsuit aside, it sounds like this teen is an incredible athlete, as she has already nabbed tons of wins for her high school and the Anchorage community. And hopefully, a day will come when a woman's body isn't perceived as controversial or a so-called distraction.