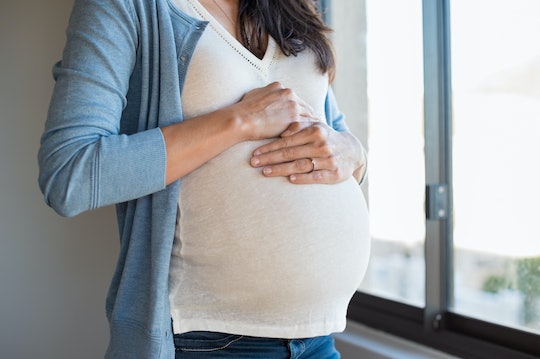 A new study has found that the 2016 U.S. presidential election may be tied to a spike in premature births seen among Latina women. According to the study's authors, there's growing evidence to suggest that Donald Trump's election increased the amount of anxiety and psychological stress felt by immigrants, their co-ethnic families, and community members.

A study published Monday in JAMA Open Network analyzed data from the Centers for Disease Control and Prevention and found that, in the nine months immediately following Trump's election in November 2016, there were 2,337 more babies born premature among Latina women than initially expected. According to researchers that translated to about 3.2 to 3.6 percent more premature births among Latina women than anticipated.

While researchers have stressed that their work doesn't suggest the election was somehow directly responsible for premature births, they've argued that their findings show a potential link. "In our analysis of all U.S. births from 2009 to 2017, we found a significant upward level shift in the number of preterm births among U.S. Latina women that coincided with the 2016 U.S. presidential election," researchers wrote, adding that they'd "observed an increase in Latina preterm births over and above levels expected from preterm birth in the general population." Researchers went on to explain that this result appeared to be most pronounced for infants that were conceived or in their second trimester of gestation around the time of the election.

According to CNN, researchers have long looked at birth outcomes in an effort to gauge acute stress among female populations. In fact, The March of Dimes has previously noted that there's growing research regarding the link between maternal stress, or the stress felt both before and during a pregnancy, and poor or negative birth outcomes. What's more, The Washington Post recently reported that negative outcomes like low birth rate or premature birth have previously been linked to maternal stress brought on as a specific result of racism, natural disasters, and domestic violence.

Researchers told the cable news outlet that their study suggested politics may also affect maternal stress and that the 2016 election specifically may have increased the amount of stress felt by Latina women. "Because mothers and children are particularly vulnerable to psychosocial stress, our findings suggest that political campaigns, rhetoric and policies can contribute to increased levels of preterm birth," CNN reported Alison Gemmill, an assistant professor at John Hopkins Bloomberg School of Public Health and the study's lead author, said.

But this isn't the first time researchers have reported finding evidence of a potential "Trump effect." In 2018, researchers from Harvard University's Chan School of Public Health found an uptick in premature births among foreign-born women in New York who'd come from Mexico and Central America following the 2016 election. According to the Daily Beast, premature births among that population rose from 7.3 percent before presidential nominations were announced to 8.4 percent after Trump's inauguration. In that same period of time, researchers found that premature birth rates for U.S.-born non-Hispanic white women remained the same, suggesting that Trump's anti-immigration stances may have played a key role.

Noting the probability that Trump's presidency has likely continued to be a source of stress for some populations, researchers behind the study released Friday have called for further work to be done. Specifically, they're eager to see an examination into the possible effects President Trump's immigration policies may be having on maternal stress and birth outcomes. Perhaps we'll see that study before the next presidential election rolls around.