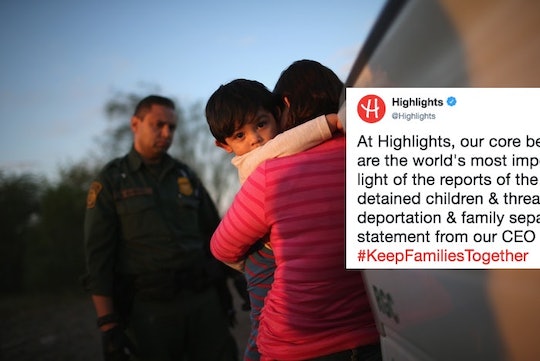 'Highlights' Has Spoken Out Against Detaining Immigrant Children & Family Separations

Reports of children being held in inhumane conditions at an immigrant detention center in Texas have spurred a well-known children's magazine to publicly condemn the Trump administration's immigration policy. On Tuesday, Highlights magazine spoke out against detaining children in a powerful statement the company's CEO stressed was about "human decency," not politics.

"We denounce the practice of separating immigrant children from their families and urge our government to cease this activity, which is unconscionable and causes irreparable damage to young lives," Highlights CEO Kent Johnson said in a statement issued Tuesday on the magazine's official Twitter and Instagram accounts. "This is not a political statement about immigration policy. This is a statement about human decency, plain and simple."

Last week, lawyers inspecting a detention facility in Clint, Texas told the Associated Press they'd found 250 migrant children detained with "inadequate food, water, and sanitation." In one instance, a handful of girls ranging in age from 10 to 15 had reportedly been tasked with the care of a 2-year-old, who had not been provided with a diaper or clean clothing when lawyers encountered him, according to the Associated Press. In another instance, an 8-year-old was reportedly found to be taking care of a 4-year-old.

"I have never seen conditions as appalling as what we witnessed last week," Elora Mukherjee, director of Columbia Law School's Immigrants' Rights Clinic, recently told NBC News of the visit.

On Tuesday, Johnson stressed that Highlights had a core company belief — that "children are the world's most important people" — and that it extended to all children. "This is a plea for recognition that these are not simply the children of strangers for whom others are accountable," Johnson said. "This is an appeal to elevate the inalienable right of all children to feel safe and to have the opportunity to become their best selves."

According to investigators, the problem of detained children being held amid alleged inhumane conditions wasn't limited to the detention facility in Clint. A legal investigator who'd visited a similar detention center in El Paso, Texas told Vox that the conditions they saw there weren't any better than what was found in Clint. What's more, reports on the conditions at immigration detention facilities surfaced days after The Washington Post reported that a Justice Department immigration lawyer had appeared to argue in court that the government shouldn't have to provide basic hygiene products like soap and toothbrushes to detained children.

On Tuesday, Johnson said Highlights had been moved to speak out "as a company" because they "want kids to understand the importance of having moral courage." He went on to define moral courage as "standing up for what we believe is right, honest, and ethical — even when it is hard." So far, Highlights' statement on detained children appears to have been well received, with celebrities like Jamie Lee Curtis calling the magazine "the voice of reason."

But Highlights didn't just condemn the Trump administration's policy o of separating migrant families. They also called on the parents and guardians of its young fan base to, whatever their political leanings may be, contact their government representatives and demand children in immigration detention facilities receive more humane treatment. "Let our children draw strength and inspiration from our collective display of moral outrage," Johnson said. "They are watching."