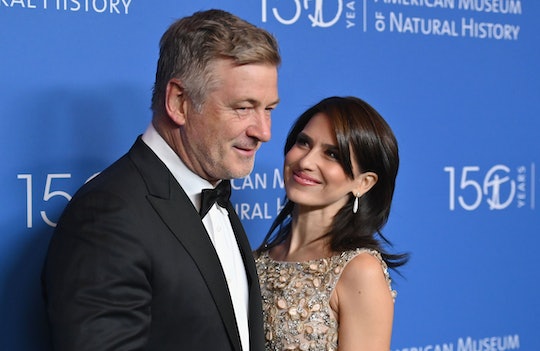 It's a party of five! In an Instagram post shared Wednesday, Hilaria and Alec Baldwin announced they'd welcomed a son late Tuesday. The birth of the couple's fifth child comes after Hilaria suffered two miscarriages within the same year.

"We had a baby last night," Hilaria shared on Instagram. "He is perfect and we couldn't be happier. Stay tuned for a name." In announcing the birth, the author and Mom Brain podcast co-host shared a sweet snapshot of her and Alec cuddling their newest arrival in a hospital bed.

In April 2019, Hilaria announced she'd suffered a miscarriage early in her pregnancy after doctors could find no heartbeat. "There was no heartbeat today at my scan... so it’s over," she wrote on Instagram at the time. "But I have some pretty strong and amazing heartbeats right here. I am surrounded by such love and I feel so fortunate."

Less than six months later, Hilaria revealed she was once again pregnant. "It is still very early... but we have learned that there is a little person inside of me," she announced in a September Instagram post.

But in November, Hilaria announced she had suffered a second miscarriage at four months. "Even though we are not ok right now, we will be," she told her followers on Instagram. "We are so lucky with our 4 healthy babies — and we will never lose sight of this."

While many people, celebrities and non-celebrities alike, often choose to keep their pregnancies a secret until the end of the first trimester, Hilaria has been outspoken about not wanting to ever have to hide a pregnancy. "These first few months are tough with exhaustion and nausea... and I don't want to have to pretend that I feel ok," the mom of five wrote while discussing her pregnancy in September 2019.

This week, however, it was nothing but good news for Hilaria and Alec, who proudly showed off the footprint of his newest child stamped on to his forearm in a photograph Hilaria shared to Instagram.

In a series of posts shared to her Instagram Stories, Hilaria revealed they had introduced the newest member of the Baldwin clan to his brothers and sisters over Facetime since COVID-19 precautions in hospitals limit visitors. And while all of their four previous children were excited for their sibling's arrival, 7-year-old Carmen was reported to already be "obsessed" with her newest brother.

The Mom Brain co-host also revealed she'd taken a walk with Alec to get her labor started and had continued to walk through her early contractions, stopping only to get Alec something to eat. "I can't handle him while I'm in labor if he's hungry," she wrote in her Instagram Stories after revealing it was the actor's first non-homecooked meal in six months. "He was so excited. Even eating outside with a woman in labor on a smelly NYC street."

On Thursday, while preparing to bring the newborn home, Hilaria shared that the newest Baldwin had "peed on his first going home outfit." With four older children, however, Hilaria knew to come prepared with a second outfit.