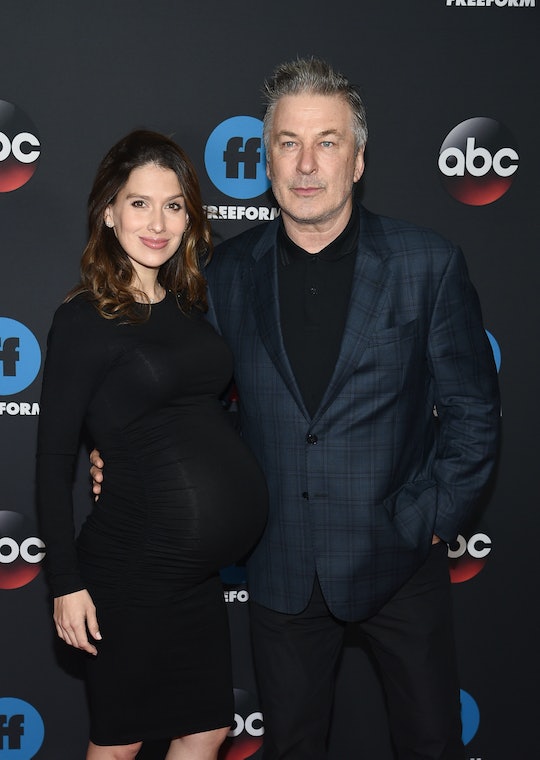 People Are Shaming Hilaria Baldwin For This Breastfeeding Video, & It’s So Frustrating

New parents learn pretty quickly that multitasking is the key to survival during those first few months with a newborn. And for breastfeeding moms, figuring out how to nurse your baby one-handed can open up so many possibilities. Once this "achievement" is unlocked, suddenly you're able to feed yourself and the baby at the same time. Or prepare a meal while also wrangling your toddler and breastfeeding. Or film a social media update while nursing. And guys, Halaria Baldwin's newest breastfeeding instagram video is seriously sweet — and totally bad*ss at the same time.

But first, a little backstory. On Thursday, the mom of four had shared with her Instagram followers that pretty much her entire family was ill, E! Online reported. "It’s been quite an adventurous week with highs and lows," Baldwin captioned a photo of herself holding her sleeping newborn son. "Romeo was born last Thursday and is a complete joy...however, I was also diagnosed with pneumonia, Rafa and Leo with the flu, Carmen came home from school with pink eye. Tumultuous to say the least, and, for a family that rarely gets sick, definitely a foreign experience."

Sounds like pretty tough time, right? Adjusting to life with a newborn is tough enough — let alone having to cope with so many sick little ones while also being sick yourself. Ugh. I can't even imagine.

On Sunday, the fitness guru provided an update on her family's health status. In her Instagram video, Baldwin can be seen supporting her baby's head as he breastfeeds, while she explains the current situation — including the lengths at which she's gone to keep her newborn quarantined. “The kids are all getting better,” Baldwin said to the camera while her baby boy suckles, People reported. She continued:

I shower in between being with them and being with Romeo to not get him sick with the germs that are on me. So far he’s very good, he’s very healthy. Hopefully he stays that way.

Let's just say Baldwin's Instagram followers had a lot of feelings about the fact that she was breastfeeding in the video. Some thought the mom of four feeding her baby during the update was incredibly inappropriate. One particularly grammar-challenged person commented, "I perfectly agree 4 a mother 2 nursuring her child...it s something natural.....but to post it on social media is really NOT ok...I mean...what is this????"

"Not everyone is happy about seeing that," another Instagram user wrote.

"Nursing your baby is beautiful but I am sure there was another way you could film this without us having to look at your bra and boobs," yet another critic commented. "There is a way to do it but you chose to it in a way to provoke people. Not nice honestly..."

Thankfully, plenty of followers came to Baldwin's defense. "You are amazing to normalize breastfeeding," one person wrote. "Thank you Mama!!!"

"Prayers for your quick recovery as well as your adorable babies," another follower commented. "Romeo will have some strong antibodies from all of this and be stronger for it."

Yet another follower clapped back at those giving Baldwin a hard time. "What about when women breastfeed in public? Feeding a baby isn’t a private act! This whole account is about her nurturing her children amongst other things. This is her level of openness and if she’s not embarrassed why should anyone else be? It’s a boob and a bra for goodness sake. She chose intentionally to share this moment with us and I’m sure she will again so maybe just unfollow if it’s not your 'thing.'"

To be honest, the breastfeeding part wasn't a big deal for me at all. The fact that this warrior mom had any energy to provide an update — while recovering from pneumonia and childbirth, after all three of her older children had been ill, and while caring for a newborn — is nothing short of miraculous. I mean, Alec and Hilaria Baldwin welcomed their fourth child on May 17, Us Weekly reported. (They were already parents to one daughter and two sons: Carmen, 4, Rafael, 2, and Leonardo, 18 months.) That's 11 days ago, folks.

For the record, it never ceases to amaze me that so many people continue to feel breastfeeding should never be seen — that somehow, a woman is supposed to live life without ever nursing her baby in the presence of others. Newsflash: Babies need to eat, regardless of where they happen to be. (And they get kinda pissed when you don't feed them.) Yes, Hilaria Baldwin chose to post a video of herself breastfeeding. So what? If society is ever going to become more accepting of breastfeeding mothers and their babies, this is exactly the type of thing that needs to be normalized.