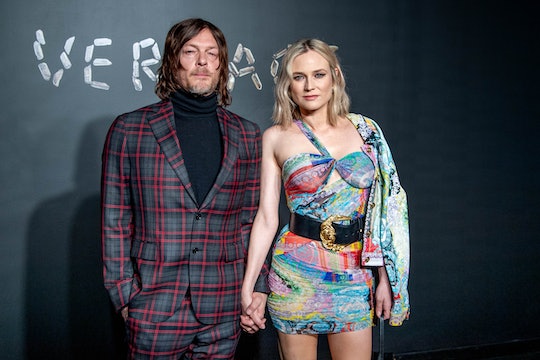 It probably shouldn't come as a total shock that people can find pretty much anything to mom-shame others over, especially if it involves any form of alcohol consumption, even pre-pregnancy or post-delivery. However, that's exactly what was happening online on Monday, before Hilarie Burton defended Diane Kruger after critics slammed her for drinking after she gave birth.

As a debriefer, here's what happened: On Nov. 2, Us Weekly reported that Kruger gave birth to her first child with partner Norman Reedus. Despite the initial swell of warm wishes from fans and followers, sentiments quickly soured as photos of Kruger were released of her going out and having a drink.

Apparently, people are upset because Kruger "should be breastfeeding," or, presumably, at a minimum, they are assuming she doesn't understand the concept of "pump and dump," the strategy some new moms utilize where they dump the next bit of milk they produce after having consumed alcohol, or that she hasn't discussed these sorts of things with her doctor.

Each sentiment is insulting, if not degrading. Ultimately, it boils down to a desire to control women and their bodies, and to police them over things that are absolutely nobody else's business... especially when they are innocuous like this.

However, when a social media user criticized Kruger, that's precisely when BFF of the year Hilarie Burton started shutting down the trolls on Twitter.

""Dear @JDMorgan @HilarieBurton," Us Weekly reported the tweet in question began. (It has since reportedly been made private, or deleted.) "Can you say to Aunt Diane that after a birth she can’t drink alcohol (bc breastfeeding). I think you both as great parents you know what I mean. I know that uncle Norman need a drink bc of her (Diane). But that poor New born baby.”

What a gross thing for you to say. You should be ashamed. I like Diane. You must feel really awful about yourself to attack someone you don't know. I suggest looking inward, lady. Get a life.

"First, how do we know its alcohol. 2nd, how do we even know she is breast feeding. 3rd, and this has nothing to do with 1 or 2, but dang she look good after just having their baby," said one reply. "Breastfeeding moms can drink. It’s called pump and dump," said another.

Though Kruger gave birth almost exactly one month ago, most of the details regarding her newest addition have been kept secret. Page Six purports to have confirmed that the baby was a girl, though her name is still unknown, and other outlets have not been able to confirm the sex of the baby.

Either way, it seems that Kruger is probably taking her time adjusting to motherhood, learning to balance her personal and social life with her newest role. And whether or not that means she wears a certain type of dress or drinks or doesn't drink on the weekend? Absolutely nobody's business but her own.

More Like This
Pinterest Predicts Their Top 2023 Trends In Parenting, Beauty, Fashion, Home, & More
Jason Ritter's Family Cannot Appreciate His Culinary Talents
What To Know About Your C-Section Shelf
Aww! 2-Year-Old Archie Is "Very Happy" To Be A Big Brother