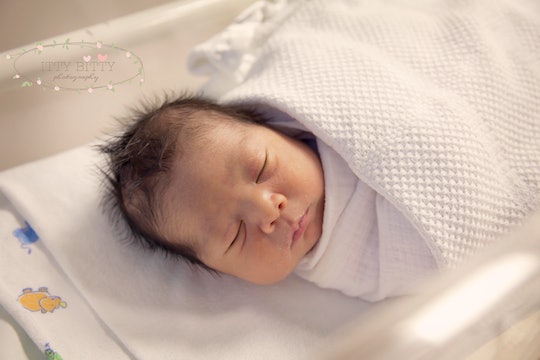 A crazy tale of "switched at birth" has come out of a hospital in Tasmania, Australia, but this isn't your classic story of a simple hospital mixup in the nursery — this is far more incredible. When Koto Nakamura arrived at the hospital with her husband Sina Niakansafy in May, the pair of soon-to-be first-time parents were fully expecting the arrival of their little baby girl. Imagine everyone's surprise when the doctor held up their newborn and announced it was a boy! Birth photographer Jessica Jackson took a hilarious photo capturing the moms priceless face — a surprised moment neither Jackson nor Nakamura and Niakansafy will ever forget.

"It was pure excitement, confusion, and disbelief. It was a real roller coaster of emotions," Jackson tells Romper of the incredible revelation in the delivery room. Jackson says the family "thought it was a joke" at first, as during Nakamura's labor, her midwife told a story that happened many years ago of another birthing mother with whom she had worked. That delivering mama was told she was having one gender, but, upon birth, learned the baby was the opposite gender. "We all laughed and joked saying imagine if that happen to Koto," Jackson says. "And then it did!"

Speaking to Australian parenting website Kidspot, Jackson described the exact moment she captured Nakamura's shocked reaction in the delivery room: "The look I captured was her saying 'A boy? Jes am I hearing this right?' I remember saying to her, 'Yes you have a son!'"

Nakamura and Niakansafy were originally told they were having a baby girl and had planned to name her "Hinata." According to TODAY Parents, the couple had already received a number of pink, girly gifts at their baby shower a few weeks prior. Nakamura spoke about her flood of emotions and thoughts in that incredible moment:

I thought everyone was joking. I lost words and I couldn't believe it until I saw his bottom. I was shocked for a few seconds, and then it didn't matter if it was a girl or a boy.

Jackson has been a professional birth photographer in Hobart for the last four years, having captured about 15 births so far. "I haven't had any surprises quite like this," Jackson says. "Every birth is so unique in its own way." That said, she advises new parents-to-be to "make sure you pack a pink suit and a blue suit in your hospital bag... Just in case!"

Faced with having to pick a different name on the spot, the new parents named their little boy "Taiga."

Just two weeks prior to Taiga's birth, Jackson had taken a series of beautiful maternity photos of Nakamura that she posted to her Itty Bitty Photography Instagram account. Jackson realizes that she managed to capture a rare and moving moment in the delivery room, and feels honored that she was a part of the experience: "How amazing will it be for Koto and Sina to tell this story to their son when he is older and show him photos of the exact look on mum's face? Amazing and priceless."

Birth is pretty amazing and priceless indeed, and for Nakamura, Niakansafy, and little baby Taiga — what an unbelievable birth story and special family memory.

Congrats to the happy family.