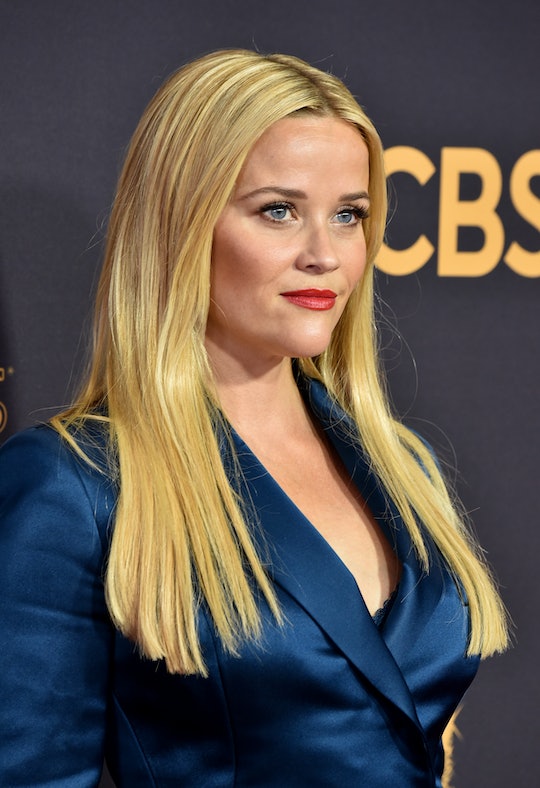 The stars of Big Little Lies Reese Witherspoon, Nicole Kidman, and Laura Dern were interviewed together on the Emmys red carpet with E! and Twitter is absolutely here for it. In fact, these hilarious tweets about the Big Little Lies cast on the Emmys red carpet prove that there is one show everyone is clearly rooting for. And, you know what, I can't blame them at all.

Based on the book by Liane Moriarty, Big Little Lies told the story of suburban moms in the affluent community of Monterey, California that naturally ended in someone's murder. In the seven weeks that it aired, it was consistently the show that everyone in your office was constantly bringing up — "You haven't seen Big Little Lies?" Now that Emmys 2017 is upon us, the stars of the show are back in the spotlight and they are bringing everyone life. Seeing Laura Dern, Reese Witherspoon, and Nicole Kidman together on the red carpet seemed to remind the good people of Twitter just how much they loved the show, the incredible performances in it, and giggling about the height discrepancy between Witherspoon and her two costars. To be fair, it is a little bit funny. Basically, these three women are not the heroes we deserve, but they are the heroes we need.

Many tweets focused on just how nice it was to see the three of them be interviewed by Giuliana Rancic together. Obviously, all three of these women brought their A-game and looked beautiful. Although not everyone was a fan of Witherspoon's look.

Personally, I don't necessarily hate Witherspoon's shiny blue tuxedo jacket dress ensemble. But it's not exactly the greatest thing she's ever worn. Nevertheless, no outfit cannot distract from the fact that these three together make for a true gathering of queens. Who run the world?

But of course, these three were not the only stars of Big Little Lies to make a splash on the red carpet. Shailene Woodley also caused a lot of reactions, though the tweets about her were slightly less favorable. In her red carpet interview, Woodley claimed that she does not own a TV, saying that she's always asking her friends how they find the time. I don't think I'm the only person to point out that if no one found the time, Woodley wouldn't have been able to make Big Little Lies and the Emmys. So...

Luckily for everyone rooting for the show, Big Little Lies and its outstanding actors won big at the Emmys. Laura Dern won the award for Best Supporting Actress, which she gracefully accepted with a beautiful speech, thanking her "tribe of four women," making the following tweet poignantly prescient.

Another winner was Alexander Skarsgard, who won the award for Best Supporting Actor. He's a great actor and he definitely deserved the win, but it still does not excuse the unfortunate mustache he's sporting on his upper lip. Seriously, sir, I do not like this look and I wish it would go away. And I am not the only one.

Obviously, the Emmys is really about celebrating greatness in television and not about critiquing people's facial hair or making amusing comments on Twitter about their outfits. All in all though, everyone's love for the Big Little Lies cast is a testament to how beloved the series really is and why so many people are hoping for a second season.