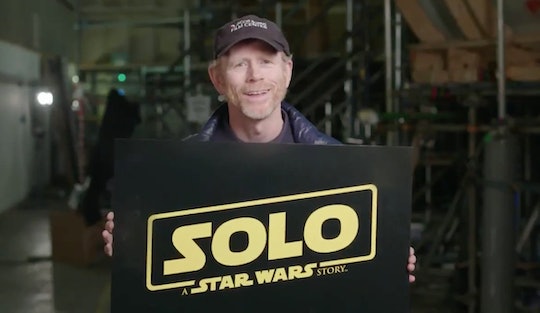 The Han Solo Film Has Been Titled 'Solo: A Star Wars Story' & Twitter Is Having A Field Day

The Star Wars universe appears to be ever-expanding, with new projects and spinoffs of the main series popping up almost every year (or so it seems). A prequel focusing on a young Han Solo has been in the works for a while now, but the title was just released. On May 25, get ready to head to theaters for the, uh, creatively titled Solo. These hilarious tweets and memes about Solo: A Star Wars Story (its full, and not much better, name) poke fun at how it calls to mind a certain college cultural touchstone: the iconic red Solo cup.

It doesn't seem like that was totally a coincidence, either. During production, the then-untitled Han Solo film was using "Red Cup" as a working title, so it looks like everyone was aware of the joke. Movies often have funny working titles before the official one is revealed to the public. Star Wars: The Last Jedi went by "Space Bear: Episode VIII" while it was filming, and even had a matching panda bear logo. It's hard not to think of red cups as soon as you hear the word "solo," so but at least the production was in on the reference from the start.

And it's kind of the perfect reference in more ways than one. What better symbol is there for a young man's halcyon days as a cocky twenty-something jerk than the red Solo cup? It's evocative, it's timely, it says it all; it's the ideal expression of Han Solo's life before he decided to transform into a grumpy revolutionary. The film follows Alden Ehrenreich as the titular Solo during his time as an outlaw and smuggler, traversing the galaxy in search of adventure. He was totally the kind of guy crushing red cups on the regular.

Plenty of fans on Twitter were unable to disentangle one Solo from another; everything from the single word title (fairly unusual for a Star Wars film) to the font on the logo called to mind the red cup too strongly to be ignored. At this point, the movie might as well embrace it even further. Why not go for a whole product placement deal? Re-package red cups with Ehrenreich's face on them and the Solo movie logo. Go back into the movie in post-production and CGI red cups in Han's hands any time he needs a drink. If you can't beat 'em, then you might as well join 'em.

But as rich and varied as the material gleaned from Solo cup comparisons was, that wasn't the only issue some fans on Twitter had with the recently-revealed title. Some found it a little on the nose that the solo Han Solo movie was also called Solo, but thought the people in charge should have pushed things even farther. How will anyone get that it's the solo story of a man named Solo if the word "solo" isn't mentioned at least a minimum of four times?

There were plenty of suggestions for alternate titles as well, from the absurd (Twitter user @spiritofsnow's "Han Yolo" is a personal favorite) to the earnest. But regardless of silly titles and the debatable necessity of countless spinoffs, one can't deny that Solo is certainly generating some buzz. Whether it's positive or not, it's getting people to talk.

Fans of the franchise still have some time to figure out how they feel about the upcoming Han Solo film, but as long as they maintain this sense of humor about it, they're sure to find something to enjoy. Solo: A Star Wars Story could be a genuinely good movie or it could be a hilarious flop. Either way, Twitter can celebrate (or mitigate the disappointment) with a funny meme or two.