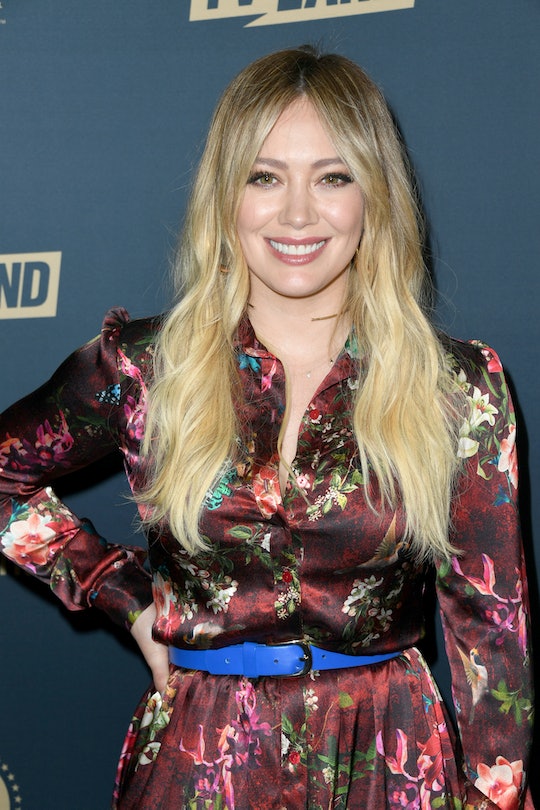 Is it just me, or does it seem like every time I turn around people are criticizing the parenting decisions of complete strangers? Although some people might argue that sharing photos of kids on social media opens parents up to backlash, knocking a fellow parent for their personal decisions doesn't seem fair. Because in the big scheme of things, does it really matter? Someone who might agree with this sentiment is Hilary Duff, who was mom-shamed for piercing her daughter's ears. And seriously, some people need to take a seat.

As a refresher, the Younger actress isn't exactly a newbie at this whole parenting business. She shares an 7-year-old son, Luca, with her ex Mike Comrie, and an 8-month-old daughter, Banks, with her fiance Matthew Koma. Duff decided to share a sweet photo of herself and baby Banks via Instagram on Monday, July 1. Instead of commenting on how adorable the mother-daughter moment was, some of her followers honed in on one particular detail: Banks is now wearing earrings. And as Today reported, they didn't hold back with their judgmental comments.

Another follower wrote, "I can't believe someone who seemed so screwed on pierced her babies ears, causing unnecessary pain that isn't for medical reasons done by a fully qualified medical professional is child abuse in my eyes, the risks are unreal and that throbbing pain in her ears no matter how happy and looked after your child is just isn't justified in my eyes."

It's worthing noting that plenty of Duff's followers also came to her defense. One person wrote, "I am 51 yrs old and my sister and I had our ears pierced when we were babies as well and done with a needle. I'm ok, Im not traumatized and I don't remember because I was a baby. People need to stop judging what other people do, and look at what goes on in their own home."

Another fan chimed in with, "There are plenty of cultures that pierce babies' ears much younger than this. I think it's cute and it's her baby so shush."

For the record, the American Academy of Pediatrics (AAP) notes that it's safe for children to have their ears pierced at any age. "If the piercing is performed carefully and cared for conscientiously, there is little risk, no matter what the age of the child," the AAP website reads. However, as a general guideline, the group advises postponing any piercings until children are mature enough to take care of it themselves.

Unfortunately, this isn't the first time Duff has been attacked for her parenting choices. But the busy actress simply doesn't have time for the nonsense. "I've seen stuff on the internet a couple years back when we were at Disneyland and I posted a picture of Luca and I kissing on the lips," she told InStyle in August 2018. "People were like, 'That's disgusting.'"

She continued, "First of all, he was three. Kiss your kids, and anyone who doesn't like it can hit unfollow. Not interested in what you have to say."

The way I see it, people are always going to have an opinion about the "best" way to raise children. So mom-shame away, random internet strangers who may or may not have kids of their own because Hillary Duff is doing an amazing job as a mom, and she couldn't care less about your apparent attempts to bring her down.