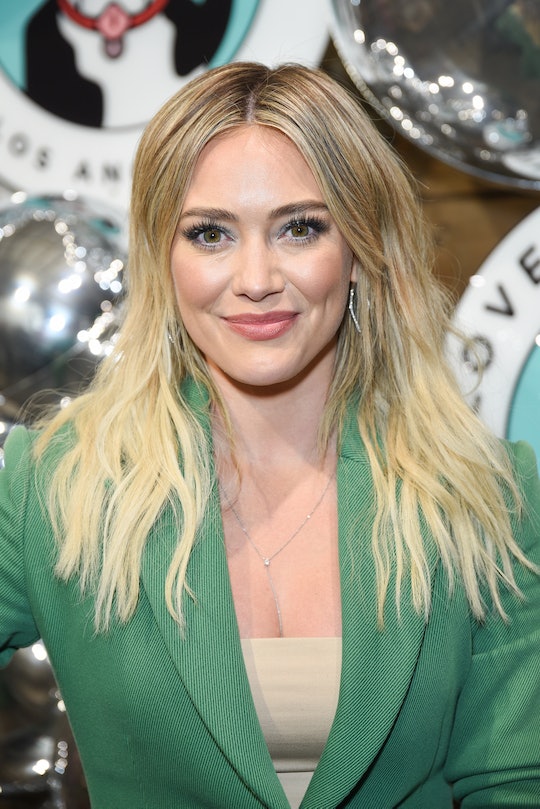 As a parent, it can feel like you're on call 24/7. Because you basically are. Even when you're not physically with your kids — and are, in fact, taking a purposeful break from them — it's all too easy to find your thoughts constantly returning to the little ones you left behind. Which is why Hilary Duff missing her kids while on her honeymoon is so relatable.

In case you lost track, Duff has two children: Son Luca, 7, whom she shares with her ex-husband, Mike Comrie; and 1-year-old daughter Banks, whom she shares with her current husband, Matthew Koma. Duff and Koma surprised fans when they tied the knot on Dec. 21 at their Los Angeles home. And now, it appears as if the newlyweds are off in South Africa enjoying their honeymoon together.

On Sunday, Jan. 5, the Younger star took to her Instagram Story to share a sneak peek at her post-wedding vacation with Koma, Us Weekly reported. One of her video clips even included an African painted dog sighting. "We are driving very fast because we caught word that the African wild dogs are up ahead, and they're being chased by some zebra — or zeh-bra, as they call it here," Duff says to the camera while riding in a fast-moving vehicle.

"I know it sounds crazy they care so much about the dogs," Duff continued. "But once you've seen all of the elephants, and the lions, and the leopards and the rhinos, and the hippos, and all the amazing things we don't just see out in the wild where we live, where we come from — we start paying attention to like, the smaller things. And the African painted dogs are fascinating."

In the end, Duff manages to catch some footage of African painted dog pups. The very next frame of her Instagram Story, however, features a photo of Banks — who isn't on the getaway with her mom and dad. "Missing this pup so much but trying my best to stay present and enjoy this one in a lifetime adventure," Duff captioned the sweet shot of her baby girl eating in a high chair. "Also sleeping. A lot."

And don't worry; the mom of two misses Luca, too. A photo of Duff's son followed the shot of Banks, alongside the caption, "Missing sweet guy too. He's prob not missing me as much because I'm making him read a chapter book with barely any pictures right now."

Duff and Koma seem to be having an amazing adventure on their honeymoon in Africa. As breathtaking as it must be to behold those beautiful creatures in the wild — and as refreshing as it must be to catch up on some sleep — I can definitely relate to the struggle of simultaneously missing her kiddos. Because once you have kids, it's pretty much impossible to check out of that role 100%. Parenthood is just part of who you are as a person — even when you're having the time of your life another continent.