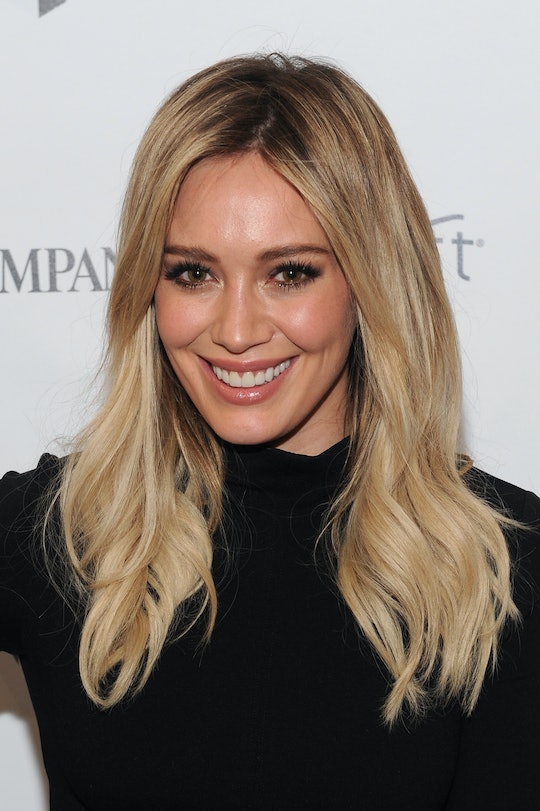 While chatting with the women on The Talk on Thursday, actress Hilary Duff discussed the way the entertainment industry treats women and mothers, and her insights point to a larger, troubling trend in society. Commenting on Jennifer Aniston's recent op-ed on being childless, the Younger actress said she was actually "pigeonholed" for falling at the other end of the spectrum — Duff said she was criticized for having a child "too soon," and pointed out the need for society to change the way it speaks about motherhood and women in general.

The discussion began when Duff responded to an essay Aniston wrote in July for The Huffington Post, in which the Friends star shut down public and tabloid interest in her "marital and maternal status." As Aniston wrote,

The reality is the stalking and objectification I’ve experienced first-hand, going on decades now, reflects the warped way we calculate a woman’s worth. This past month in particular has illuminated for me how much we define a woman’s value based on her marital and maternal status. ... Here’s where I come out on this topic: we are complete with or without a mate, with or without a child.

"I see her point," Duff said on The Talk on Wednesday. "She is such a beautiful role model and a smart woman to have the courage to say these things in Hollywood. But I feel like I was judged for having a baby too soon and getting married too soon, and now I'm pigeonholed for being 'a mom.' But then lots of women in the industry that don't have a child yet are judged for not having a child."

Duff and Aniston have clearly zeroed in on the harsh double standard women must live up to: they're expected to have children, but only at a certain time, and only after checking certain items off of a list. It's an issue that's magnified in Hollywood, thanks to tabloid headlines that blare society's expectations and stereotypes out at the world — but it's an insidious problem that goes on to affect most women.

Women like Duff, who have children at 24 and marry young, are told they're missing out on their youth. Those who want to forego motherhood are told they will change their minds, that they'll eventually regret their choice, while those who choose single motherhood are pitied because people think they should "find a good man." And even mothers who have followed the "ideal" timeline to a tee walk a difficult line: they're supposed to consider parenting the most important job in their lives, but they should also be hustling at a real-life job, too, and they should do all of that while remaining fit and carrying on a successful relationship. Step outside of the very narrow, socially-acceptable path of being a mother and judgment is sure to follow.

"It's crazy that women... we are the most in demand and the most desirable, but the most judged and the hardest on one another," Duff said on The Talk. "It's so much scrutiny."

Society won't adapt overnight, but the more women like Duff and Aniston bring attention to the issue, the closer we'll get to actual change. The truth of the matter is, motherhood is different for every single woman who pursues it... or doesn't. The fact that we stigmatize a good half of the ways women relate to parenting is bizarre — and Duff deserves a round of applause for pointing that out.