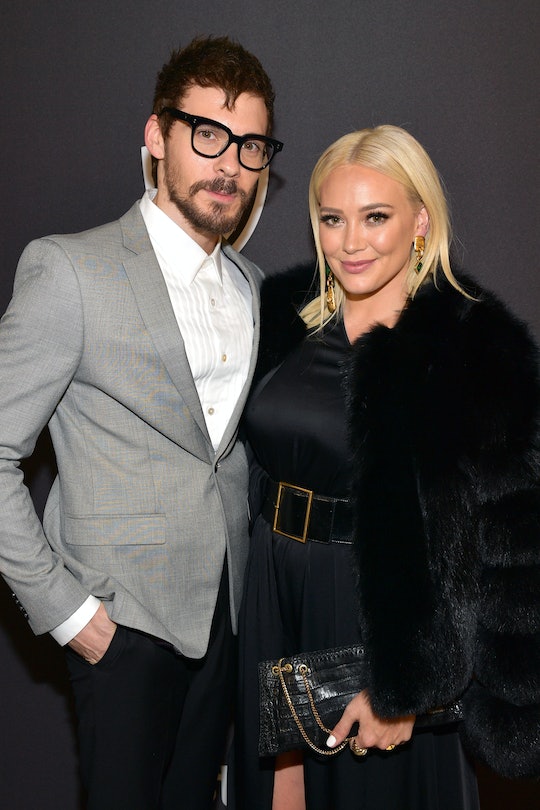 Tattoos are a permanent and symbolic way to honor something really special in your life, so it makes sense that plenty of new parents have opted to get new ink once they start this chapter of their lives. Like Matthew Koma, Hilary Duff's fiance, who got a touching new tattoo in honor of his kids.

In case you lost track, the Lizzie McGuire star and her musician fiancé share a 1-year-old daughter, Banks, in addition to Duff's son, Luca. Although Luca's father is Duff's ex-husband, Mike Comrie, it's clear Koma has a special relationship with her 7-year-old. This is evident by Koma's new tattoo, which was inspired by a photo of Banks and Luca.

Koma revealed his fresh ink on Tuesday, Nov. 12 via Instagram, according to E! News. Alongside a photo of the tattoo on his upper arm, Koma captioned his photo with, "Luca (7) and Banks (1) holding hands just after her 1st birthday. Thank you @curtmontgomerytattoos for engraving my kids."

Koma's Instagram followers practically swooned over his fatherhood-inspired ink. One person commented, "This is literally the sweetest most adorable thing. #relationshipgoals."

Yet another person declared, "I'm crying this is so beautiful."

Of course, the fact that Koma has a special bond with Luca shouldn't come as a huge surprise to fans. Duff has previously opened up about how her main squeeze won over her son in an interview with Parents.

"I think that Luca liking Matt was the biggest concern of Matt's life," she told the publication. "He didn't want to be forceful and bring a bunch of gifts over you know? He was like, 'I am just going to let him come to me.' I think it was a really smart move because now they have such a special relationship and they have their games that they play that I'm not really involved in." Apparently, Koma and Luca even refer to themselves "the sweet team," and to Duff as "the broccoli team." LOL.

Duff added, "Matt is so helpful and so great with Luca. He knows that Luca has a great dad too, so he is like, 'I feel so lucky that I get to experience watching him grow up and be his special friend.'"

Too sweet, right? So of course Luca was included in his tat tribute to fatherhood.

Koma isn't the only celebrity dad to show off ink in honor of their kids. Not by a long shot. David Beckham has all four of his children represented on his body; he even let his daughter, Harper, design a tattoo of a drawing on his hand. Not to mention, Kanye West has a tattoo of his daughter North's birthdate on his wrist. Taye Diggs has several tattoos in honor of his son, Walker. The list goes on and on.

I don't have any tattoos at this point in my life. However, I wouldn't completely write off getting some ink representing my four kids. And Matthew Koma's beautiful new arm tattoo is serving as some serious inspiration right now.