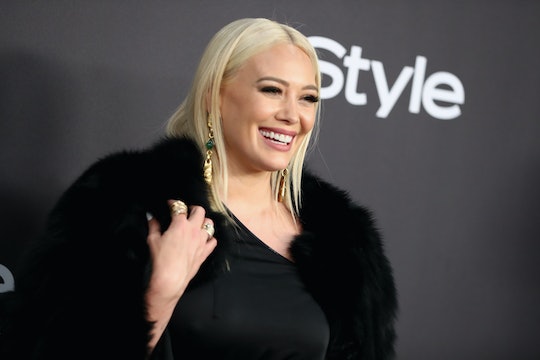 When I was pregnant with my second child, I worried about how my first would adjust to be a big brother. Would he be jealous of all the attention a newborn requires? Would he be downright resentful? Or would he shower his baby sister with hugs and kisses — and it'll be like they were always meant to be together? It's difficult to tell in advance how an only child will react to and bond with a new sibling. But one thing's for sure: Hilary Duff's new photo of Luca and Banks is sibling bonding at its finest.

As a refresher, the Younger actress currently has two children: A son, Luca, 7, whom she shares with her ex-husband Mike Comrie; and a daughter, Banks — who was born on Oct. 25, according to The Hollywood Reporter — whom she shares with her boyfriend Matthew Koma. On Wednesday, March 20, the mom of two took to Instagram to share a sweet photo of her little munchkins. In the adorable shot, big brother has baby Banks on his lap while sitting on a chair — and she's pushing on and grabbing his face, as little sisters tend to do. "Smiles even through his sisters abuse lol #bestbigbro," Duff captioned the post.

Seriously, though. How sweet are these two? This photo is awesome to me for a couple of reasons. First, it shows the close bond Luca and Banks clearly have. Second, it shows exactly how siblings also derive pleasure from messing with each other and pushing one another's buttons. (And sorry, Hilary, but that second part only gets worse as they get older.)

Speaking of getting older, the proud mama also posted a birthday tribute to her oldest child on Wednesday, writing, "Luca Cruz...the star of my heart. Makes me proud everyday. 7 better look out....he has arrived ♥️ #wherehasthetimegone."

As Duff told People in December, the transition from only child to big brother was surprisingly smooth for Luca. "Honestly, I thought it was going to be a huge adjustment, but he kind of acts like she’s always been here. It’s really sweet!" she told the publication. "One of his favorite things is skin-to-skin before bath time, and he loves to pinch her cheeks — which is funny because he hated when anyone did that to him. I think he finds her edible."

I suppose the smooth transition shouldn't be too shocking. Before his baby sister was even born, Luca wanted to be involved in picking out a name for her. "We’re up for any kind of suggestions, but Luca thinks Cafont Croissant is, like, the coolest name," Duff told James Corden in June, according to Us Weekly. "When I just refer it as 'Cafont,' and I’m like, 'That would be so cool, no one at school’s gonna be named Cafont.' He’s like, 'Croissant. Cafont Croissant'. It, like, goes together, there’s no separating the two." LOL.

My first two kiddos were only two-and-a-half years apart, and it turned out my son was pretty "meh" about having a baby sister. He seemed a bit more interested in our third child, another sister. But by far, he's been the most interactive and adorable with our fourth child (yet another sister). I'm not entirely sure why. But I have hunch it has to do with the age difference. Because like Hilary Duff's kiddos, my first and fourth children are about seven years apart. And hopefully, they'll have an equally sweet sibling relationship!