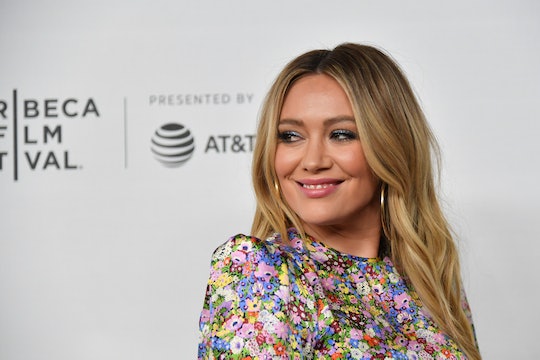 Although there are plenty of celebrities who are outspoken about their personal beliefs about hot-button issues, many stars prefer to stay out of politics. It makes sense, if you think about it from a business standpoint. Their fans likely fall on both ends of the political spectrum, after all — and they don't want to risk alienating a large portion of their supporters. I get it. However, I also have mad respect when celebrities want to use their large platforms to promote what they think is just and fair. And Hilary Duff's newest Instagram post makes it clear she supports a woman's right to choose.

As BuzzFeed reported, a number of celebrities have spoken out about their support for a woman's right to choose in recent weeks. And it turns out Hilary Duff is among them. On Friday May 17, the actress took to Instagram to make her stance on abortion known. Duff shared pins showing a hand holding a sign that reads, "Uteruses before duderuses." If you scroll over, the second image reads, "77% of anti-abortion leaders are men. 100% of them will never be pregnant." Duff's caption, meanwhile, was simply two emojis of the female symbol, a flexing arm, two fingers forming the peace sign, and a middle finger.

Plenty of Instagram users appreciated Duff using her platform to support women's right to choose. One follower commented, "I’m confident that if men could be pregnant abortions would be legal EVERYWHERE."

Another person wrote, "You are my absolute hero thank you for being not only an amazing mother BUT ALSO a great person with a moral compass 💁🏻‍♀️💁🏻‍♀️💁🏻‍♀️."

Another Instagram user chimed in with, "Thank you! it should be the women's decision ON WHAT SHE WANTS TO DO WITH HER OWN BODY."

Others attempted an argument many have used before: Celebs should keep their noses out of politics. "HOLLYWOOD NEEDS TO STOP STICKING UP FOR ABORTIONS," one Instagram user demanded.

Other supporters of forced births attacked Duff for voicing her pro-choice stance on abortion — on the basis that she's a mom herself. (If you remember, Duff welcomed her second child — a daughter named Banks — in October, according to E! Online. She also has a 7-year-old son, Luca.) One Instagram user wrote, "😳😳😳 And you have kids 😭 so sad."

Another person commented, "See what I really don’t understand is how can a woman who are mothers support abortion???!! Shouldn’t women have more compassion for babies who have no voice than men? No, they don’t know what pregnancy is like but they don’t have to, to know how precious a baby is."

As a mom of four whose pro-choice stance was only strengthened after becoming a mother — that's just not how it works. It's because I've been through pregnancy and childbirth that I know how difficult — physically, emotionally, and financially — bringing a child into the world is. All of my pregnancies were very much wanted, and they were still hard as hell; I couldn't imagine being forced to carry a pregnancy against my will.

Still, plenty of Instagram users came to Duff's defense. One follower wrote, "So many people saying you can't be pro choice just because you have children 🤦🤦🤦🤦 i have a child, that I made the CHOICE to have and it is no one's damn business if someone makes the CHOICE not to."

Just this year, eight states have passed laws restricting abortion, according to The New York Times. The latest happened on Friday, May 17 in Missouri — when the state's Republican-led legislature passed a bill 110-44 to ban abortions at eight weeks gestation. Only in the case of a medical emergency during which the mother's life/bodily function is in danger does the ban not apply, USA Today reported. Rape and incest are not exceptions.

So yeah. Kudos to Hilary Duff for supporting a woman's right to choose. Because in light of the "heartbeat bills" and abortion bans that are popping up left and right, now is definitely the time for pro-choice advocates to let our voices be heard. It's either that, or we stand by idly as rooms full of men continue to pass legislation controlling women's bodies. And you know what? F*ck that sh*t.