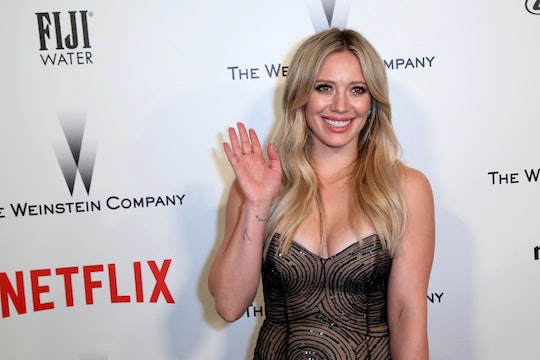 This year has been a year for the history books for Hilary Duff. The actress and singer welcomed her second child, a daughter named Banks, into the world in October. And since then, she has been sharing photos of her super adorable daughter and son, Luca to her Instagram. And Hilary Duff's newest photo of Banks and Luca is the perfect representation of their sibling bond, yet.

Although Duff has said that her "brain is bare" since giving birth to Banks, according to Us Weekly, it's probably because her focus has been on her super adorable family. In October, Duff and boyfriend Matthew Koma welcomed their first child together — their daughter named Banks, according to E! News. She joined Duff's son from a previous relationship, 6-year-old Luca, who she shares with ex-husband Mike Comrie, according to the Daily Mail. In spite of the age difference between Luca and his baby sister, he has so much love for her — although it just might not be mutual.

In a new Instagram post, shared to Duff's account on Friday night, Duff captured her son sneaking a kiss on her daughter's head. But, Banks doesn't seem too impressed by the affection she's receiving from her older sibling. In the photo, Banks can be seen pushing her hand toward's her brother's face with her mouth open ready to cry.

"Banks has already learned that boys have cooties," Duff captioned the photo. If she hasn't learned that by now, she definitely will learn it soon enough.

The photo doesn't involve much but speaks volumes about the siblings relationship and how much love Duff has for her two little ones. And even Duff's followers can't get over how cute the siblings are.

"It looks like she's saying 'Nooooo.'," one commenter wrote.

"OMG this is the best picture ever," another commenter added.

But most commenters seem to agree that Banks looks like the "coughing cat meme" (which is pretty accurate).

Although Banks might be a little repulsed by Luca in this photo, Duff has insisted in interviews throughout the year that the two siblings get along just fine. Duff told People earlier this month that her family can't get enough of the little girl, even if she has changed their lives forever. Duff said Luca loves his sister:

Honestly, I thought it was going to be a huge adjustment, but he kind of acts like she's always been here. It's really sweet! One of his favorite things to do is skin-to-skin before bath time, and he loves to pinch her cheeks — which is funny because he hated when anyone did that to him.

"I think he finds her edible," Duff added. But clearly Banks needs a bit more time to warm up to her brother.

But Duff is keeping things fun in her household for her six year old. "My favorite thing to do with him [is] chase him around with dirty diapers," Duff also told People.

If this is the kind of fun that they're having in the Duff household, imagine what the siblings will be like when Banks is old enough to chase her brother around the house. It will most likely be chaos. But, just like in this photo, the love between the siblings is very evident and will continue to stay strong throughout the years.