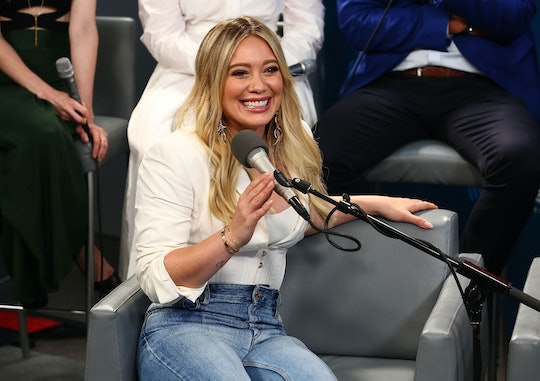 Hilary Duff's Quotes About Mom-Shaming Are So Badass

Actress Hilary Duff is not putting up with any sort of mom-shaming. Or body-shaming. Or mom-body-shaming. According to E! News, Duff recently posted on her Instagram account in response to recent photographs taken of her while vacationing in Hawaii that have drawn some less-than-complimentary comments. In the post, Duff spoke out against body shamers, and made sure everyone knows she's proud of her body — especially because it gave her "the greatest gift of my life," her son, Luca. But that wasn't the first time Duff shared an empowering message on her Instagram page — and in fact, she's been inspiring other moms with other statements she's made for awhile now. Hilary Duff's quotes about mom-shaming are super empowering and inspiring, and definitely worth taking a look at if you need a little dose of mama sisterhood.

According to Refinery29, Duff has recently been vacationing in Canada, where her son's father is from, but on this particular vacation she decided to post a photo of herself — wearing a bathing suit, taken from behind, while holding her son — on her Instagram profile to make a point about the way people judge "flaws." And she did it on behalf of all women, but especially moms.

"I am posting this on behalf of young girls, women, and mothers of all ages," the post began. Further down the caption, Duff continued, "Since websites and magazines love to share 'celeb flaws' - well I have them!"

And by "flaws," Duff probably means the cellulite on her legs and butt — cellulite that is normal and common, by the way. Duff then went on to encourage other women — particularly moms who have given birth the way she did to her 5-year-old son — to "be proud," and not ashamed of their bodies. Duff wrote:

Ladies, lets be proud of what we've got and stop wasting precious time in the day wishing we were different, better, and unflawed. You guys (you know who you are!) already know how to ruin a good time, and now you are body shamers as well.

And she concluded the fierce message with a simple hashtag: #kissmyass 😛✌🏻

And this isn't the first time Duff has spoken out on issues affecting mothers. For example, she addressed anyone who might judge her or anyone else for being a divorced mother, according to The Daily Mail, during an appearance on the The Talk:

And the inspiring anti-mom-shaming quotes don't stop there. In the aforementioned Instagram post, Duff specifically pointed out why she loves her body so much — and it directly relates to being a mom. She wrote in the post:

My body has given me the greatest gift of my life: Luca, 5 years ago. I'm turning 30 in September and my body is healthy and gets me where I need to go.

And isn't that what's really important? She's healthy, her son is healthy, and that's what really matters, right?

But Duff has admitted in the past that she hasn't always been thrilled with her body. In February, she alluded to this in another Instagram post, this time about her self-consciousness in regards to her legs.

"I didn't always love my legs," Duff's post began. "But as I've grown, I've learned to love and celebrate myself, just as I am." Duff continued:

I began to realize that my legs are STRONG and they carry me every. single. day. Our bodies are amazing and something to be grateful for. I'm ME and that's really enough!

And that's definitely a message every mom needs to hear — that you are enough, exactly as you are.

More Like This
Grandma Tina Shared A Cute Little Update About Her 5-Year-Old Granddaughter Rumi
Hilary Duff, Meghan Trainor, & Ashley Tisdale Went on A Moms Weekend Getaway Together
20 Adorable Photos That Prove Prince William & Princess Charlotte Are Thick As Thieves
The Bear’s Jeremy Allen White Is A Private Breakfast Chef For His Daughters