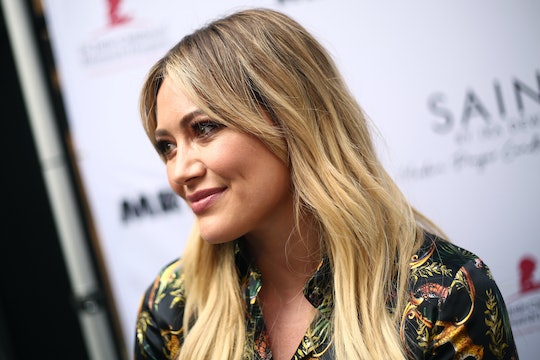 Hilary Duff's Quotes About Motherhood Are So Spot On

She may have been introduced to us as the most stylish Disney Channel icon of the early 2000s (who is, incidentally, making her comeback pretty soon) but her parenting style is really what dreams are made of. Hilary Duff's quotes about motherhood will make you laugh, cry, feel empowered, think hard, and remember why she's such an amazing woman all-around.

Duff gave birth to her son, Luca Cruz Comrie, with former husband Mike Comrie back in 2012. However, it was just this past year that Duff truly found her "happily ever after" with longtime friend Matthew Koma. On Oct. 25, 2018 — just over a year ago — Duff welcomed her first daughter with Koma, Banks Violet Bair. To make things more exciting, Duff and Koma got engaged earlier this year, The Los Angeles Times reported. To announce the big moment, Duff wrote on Instagram: "He asked me to be his wife."

Now, Duff has been doing the whole parenting thing for quite a while — and soon, she'll be doing the wife thing, too. As it turns out, she's pretty amazing at all of it. Given that she clearly has a lot of wisdom to distill when it comes to everything from body image to breastfeeding, these are some of her best quotes about experiencing motherhood.

"It's Just Made Me A Nicer Person"

Duff says motherhood has changed her... for the best. "He's taught me so much," she told PopSugar of being a mother to her son, Luca. "I feel like I was never this patient, but it's just made me a nicer person, and I apply it to other aspects of my life."

"It's Hard To Say That You Really Can Have It All"

In an interview with Redbook, Duff opened up about "mom guilt," and how she handles both her career, and her kids.

“It’s hard to say that you really can have it all. I think you can to a certain degree, but fully loaded, pedal-all-the-way-down is tough,” she said. “You’re missing out on something, either on the career or on the family. When I’m really busy with work, I feel extremely guilty.”

"Everything Kind Of Becomes About Them"

If there was any doubt that Duff was fully commited to her children, this will dispell it for good. "Everything kind of becomes about them," she told PopSugar. "And all of those things that used to stress me out or I used to worry about or be insecure about, that doesn't matter... Now that I'm six years in, I'm like, 'Oh, yes. All of this is going to work itself out.'"

"My Body Has Given Me The Greatest Gift Of My Life"

In 2017, Duff shared an unretouched photo of herself in a bathing suit at the beach. Though everyone knows the paparazzi — and the public in general — are relentless when it comes to policing women's bodies, Duff was having none of it, and made a statement about learning to appreciate what we have.

"I am posting this on behalf of young girls, women, and mothers of all ages. I'm enjoying a vacation with my son after a long season of shooting and being away from him for weeks at a time over those months. Since websites and magazines love to share 'celeb flaws' - well I have them! My body has given me the greatest gift of my life: Luca, 5 years ago," she wrote.

Duff concluded: "I'm turning 30 in September and my body is healthy and gets me where I need to go. Ladies, lets be proud of what we've got and stop wasting precious time in the day wishing we were different, better, and unflawed. You guys (you know who you are!) already know how to ruin a good time, and now you are body shamers as well."

Duff knows she doesn't have all the answers as a parent — nor does anyone, really. However, in an interview with HuffPost, she opened up about why having a strong support system is essential as you navigate your way through those first few months of parenthood.

“It’s such a wonderful experience and obviously life-changing and altering,” she said. “You just don’t even know until you have a child what that bond does, and how it changes you, and what you learn.”

“But it is also a big struggle. It’s the hardest thing as well. You’re exhausted. You don’t have all the answers, no matter how many books you’ve read. You’re dealing with a hormonal roller coaster. It’s a lot of different things that you don’t always understand. So having a support system around me was key in the first year.”

“You Put A Lot Of Pressure On Yourself"

“You think because you carried a baby inside you and you’re so close to them, you think you should know all the answers,” she also said in her interview with HuffPost. “You put a lot of pressure on yourself. So be proud of yourself and take time for yourself, [which] is not always easy to do when you’re in the thick of it.”

Describing her first week of total sleep deprivation, Duff explained that she found it essential to take naps when her baby was napping.

“The first week I was like, ‘I’m doing this, I’m good. I can not sleep, I can do this.’ I don’t know where you get that energy from. Then it hits you — the fatigue,” she told People. “So many people were like, ‘Take naps when your baby naps. So I tried, and it really helped a lot. I thought when he was napping that was the time I could do all the things I needed to do. It’s a fine balance.”

It's clear that Duff is human like the rest of us, but that she's still a seriously awesome mom.

More Like This
Hilary Duff's Daughter Mae Is Every Toddler Obsessed With 'CoComelon'
Exclusive: Watch Hayden Panettiere Talk About Addiction Treatment 4 Months Postpartum
Gabrielle Union Admits She May Be Becoming A Bit Of A Dance Mom With 3-Year-Old Kaavia
10 Parenting Lessons From Abbott Elementary That You'll Want To Write Down