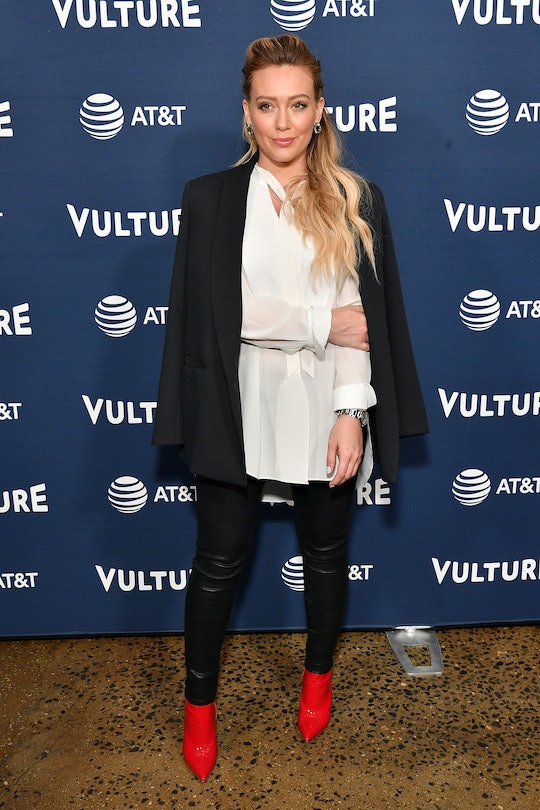 Ask any new mom and she'll tell you that life with a newborn has huge ups and surprising and sudden downs. So it comes as no shock that a super-relatable celebrity would admit to having the same experience. And Hilary Duff's update on life with 2-month-old baby Banks is as honest as it gets.

Duff had Banks Violet, her second child and first daughter, with partner Matthew Koma on Oct. 25, as Us Weekly reported. Duff also has a son, Luca, 6, from her first marriage, as Us Weekly confirmed, and he plays an active role in her Instagram posts as a fun big brother for baby Banks.

Duff sure looks like she has it all judging by her social media — supportive partner, beautiful family, snaps taken on the beach — but the star of the hit TV Land showYounger just isn't the type to try to outdo people.

Take one of her most recent posts: Posing in the bathroom mirror in jean shorts and crop top, with cutie-patootie Banks nestled into her shoulder, Duff could have written the image's caption about the fact that her abs are looking surprisingly, well, there for having recently given birth (as some fans did notice). Instead, she chose to acknowledge that this fourth trimester thing is real.

"We two months in sister," she wrote. "Been a lot of sleepless nights and you sure do scream a lot. But you are worth every moment my little strugglebunny."

I've always adored Duff's honesty, and fans seemed to feel the same way. "Love your vulnerability," replied one user. "Makes this mama realize we all struggle at times❤️ but like you said, it’s worth every moment," another commented. "Keeping it real, Mama! Much love!!" wrote yet another.

Duff, whose role on Younger has grown larger in recent seasons, as Entertainment Weekly reported, is an A-lister who clearly remains humble. Active with several charities, as her social media shows, Duff also tells it like it is as far as her own struggles, including what it's been like dealing with mom-shamers and working on one coast to film her show while her son is on another, as InStyle reported.

Taking a second off to smile for the cameras at Disney's Toys for Tots holiday kickoff earlier this month, Duff told People that it's going well with the baby but that "Everything has been flipped upside down ... Everyone in the household is obsessed with her, but you forget the demands of a newborn! It’s nonstop, and there basically can never be enough hands."

And while lots of fans noticed her post-baby physique on Instagram, I just love the fact that Duff has rejected the culture of "who will get skinniest, the fastest" post-baby, a competition that I personally think has intensified as more public figures post daily selfies. (Baby Center reported that 61 percent of brand-new moms anticipated being back to their pre-pregnancy weight by the time the baby turned 1, but nearly 60 percent were still at least a bit above that by that time.)

As Duff told Women's Health earlier this year, she's been through pregnancy before, and knows what it's like to feel frumpy post-baby.

"Being a new mom was one of the happiest times of my life, but how I felt about my body really sucked," she shared. "I wasn't one of those women who just could nurse and lose the weight."

Duff added that she's come around to the idea that body positivity is more important than measuring up to some goal: "Now, I'm happy to say that I have a pretty healthy relationship with my body ... It's terrible that skinny is beautiful ... If we can just try to celebrate being individuals, and try to feel good instead of trying to fit in, I think that would be huge."

I love Duff's attitude toward life and such challenges as baby's first year. She'll do great with whatever obstacles parenthood throws her way next.