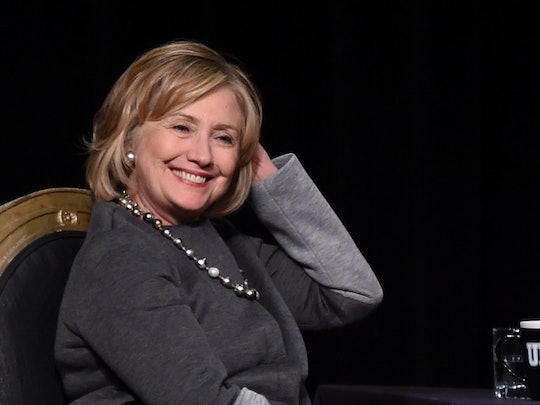 Hillary Clinton, 10 Year Old Talk Bullying, & Their Comments Will Move You To Tears

While attending a town hall event in Iowa on Tuesday, 10-year-old Hannah Tandy, seated in the front row, stood up and asked future president and current queen Hillary Clinton, "What are you going to do about bullying?" according to CNN. Clinton asked Tandy to elaborate, and the girl explained that she sometimes hears her fifth grade classmates talking behind her back about her asthma.

Apparently, Clinton's voice cracked as she responded to Tandy, remarking on how bullying seems to be easier and more widespread thanks to social media.

People can say something about somebody without having to look them in the eye or see them walk by, and so I think we all need to be aware of the pain and anguish that bullying can cause.

She also said that more work needs to be done in order to increase the awareness of this issues with parents, teachers, and school administrators.

Clinton also assured Tandy that she's no stranger to bullying, herself, telling the 10 year old:

You're looking at somebody who's had a lot of terrible things said about me and I am well aware of the fact that it's really easy to do that. Luckily, I'm old enough where it doesn't particularly bother me, but I can't even imagine what it's like to be, you know, a young person in today's world where that's coming at you all the time.

Donald Trump, an unemployed reality show host who, just a day prior, had called Clinton "disgusting" for urinating in a toilet like most humans do multiple times a day, took to Twitter to accuse Tandy of being a plant, and Clinton of "play[ing] the war on women or women being degraded card." Classy.

As CNN points out, according to the National Association of School Psychologists, 17 percent of American students report being bullied two or three times a month. Hillary Clinton, in my best estimate, gets bullied two or three times a second, and probably will until the day she dies. Bullying doesn't end once you graduate, and she clearly empathizes with what these kids are going through. If Clinton wins the presidency, she's in a unique place to help them. Here's hoping she does.