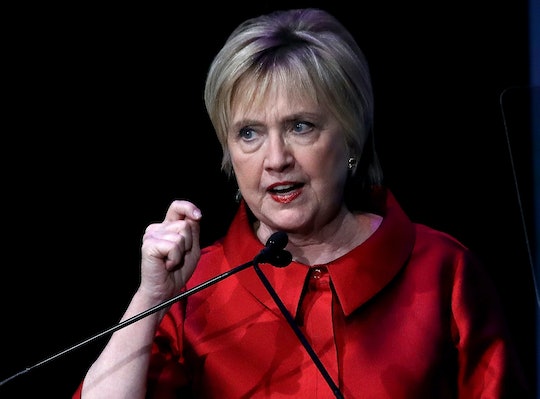 She's a woods-wanderer no more. Former Secretary of State Hillary Clinton has re-emerged in public life, and she's made it clear that, although she lost the election, she's not going to stop fighting for a better world. In a speech on Tuesday, Hillary Clinton addressed sexism in the workplace, highlighting the struggles that women still face. And she had plenty of pertinent examples of such sexism from the last couple of days alone.

Clinton was speaking at the Professional BusinessWomen of California conference in San Francisco, to a crowd that made it clear, via standing ovations, how glad they were to see Clinton back in action. Clinton was eager to address a topic she knows all too well — the way that sexism and structural barriers can still hold women back, although in less obvious ways than they once did — saying,

Just look at all that’s happened in the last few days to women who were simply doing their job. April Ryan, a respected journalist with unrivaled integrity, was doing her job just this afternoon in the White House press room when she was patronized and cut off trying to ask a question. One of your own California congresswomen, Maxine Waters, was taunted with a racist joke about her hair. Now too many women, especially women of color, have had a lifetime of practice taking precisely these kinds of indignities in stride. But why should we have to? And any woman who thinks this couldn’t be directed at her is living in a dream world.

In the first exchange to which Clinton was referring, which took place on Tuesday as well, reporter April Ryan was interrupted multiple times by Press Secretary Sean Spicer while trying to ask a question about Russia. Spicer finally snapped at Ryan to "stop shaking [her] head," which prompted a swift backlash on social media. While Spicer certainly has a history of getting testy with reporters, many questioned whether he'd ever treat a man that way.

As for the second instance, Clinton was referring to an exchange on Tuesday morning, in which Fox News host Bill O'Reilly said on television that he couldn't focus on what Democratic California Rep. Maxine Waters was saying during a speech because her hair looked like a "James Brown wig." Critics called the host out for the inherent sexism and racism in his statement, and O'Reilly later apologized for the comment.

Clinton didn't stop there. She used the rest of her speech to address a host of other issues related to sexism, questioning the low representation of women in the government, expressing dismay at the idea of Republicans wanting to take away maternity benefits, advocating for a better paid leave policy, and saying, "Advancing the rights and opportunities of women and girls is the great unfinished business of the 21st century."

It's good to have the original nasty woman back. Here's hoping people are still taking her words to heart.