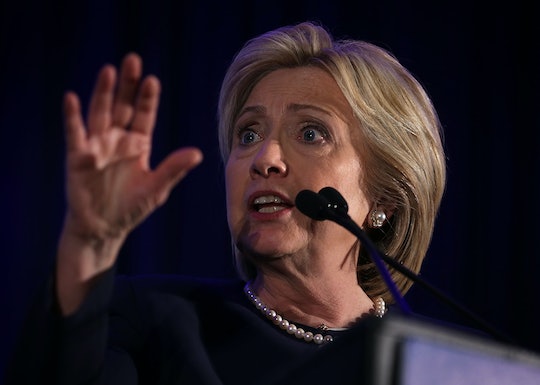 No stranger to controversy, Donald Trump set off a firestorm Monday after announcing his plan to ban all Muslims from entering the United States. Many (many!) people hit back at Trump’s plan, and on Tuesday, Democratic presidential hopeful Hillary Clinton condemned Trump’s plan and all anti-Muslim hatred in a post on her campaign website. In the post, entitled, “No Donald Trump. We’re not barring Muslims from entering the country,” she writes not only about the ways in which Trump’s apparently anti-ISIS plan is only further fueling terrorist recruitment, but also about how blatantly it flies in the face of American values, and how virtually all of the GOP candidates share Trump’s view, even if they haven’t been quite as open about it. But most importantly, she stands up for Muslim Americans, all three million of them, because just like every other American citizen, they deserve to be here, safe in their own country.

Although Clinton has often criticized many of Trump’s proposed policies during the course of the presidential campaign, she doesn’t hold back in her latest attack, calling his anti-Muslim plan “a shameful idea. It’s also dangerous. At a time when America should be doing everything we can to fight radical jihadists, Mr. Trump is supplying them with new propaganda.”

She also discusses the need to defeat ISIS — a “brutal, nihilistic enemy who twists Islam to justify mass murder” — and points out how backwards Trump’s approach to fight terrorism really is:

The vast majority of Muslims here and abroad are on our side in this fight. Many are helping prevent radicalization, including here at home. So why would anyone suggest that they’re the enemy? How does that help us? Radical jihadists are telling people that the United States hates Muslims — and there’s Donald Trump on TV screaming about how he’s going to keep all Muslims out. He’s strengthening the terrorists’ argument.

But according to Clinton, Trump is not the only candidate fueling this anti-Muslim sentiment. She points out that, even though many Republican candidates have spoken out against Trump’s latest comment, many of their views aren’t actually that far off from Trump’s:

"Ben Carson says that a Muslim shouldn’t be president. Marco Rubio compares Muslims to members of the Nazi Party and refuses to rule out monitoring and closing of mosques. Jeb Bush and Ted Cruz have suggested that we implement a religious test for Syrian refugees — one that only Christians would pass. Chris Christie says not even 3-year-old Syrian orphans should be let in. And they insist on using the phrase “radical Islamic terrorism” — in fact, they criticize anyone who says anything else — even though it drives the exact narrative the jihadists want to advance: that we’re at war with an entire religion."

Partisan politics aside — of course she’s going to take a shot at the entire Republican party — the real value in her message is the support she gives to Muslims, who deserve to know that Trump’s views are not representative of all Americans.

Imagine hearing political leaders threaten to register and track you, implying that your religion is violent, that you’re violent, that you’re the enemy. Nearly 3 million Americans are Muslims. They’re our family, our friends, our neighbors, and co-workers. They serve in the military, save lives as doctors and nurses, and serve our communities as police officers, firefighters, teachers, and civic leaders. They’re patriots — proud Americans, just like the rest of us. They deserve better than this.

She goes on to say:

[What] you’re hearing from Trump and other Republicans is absolutely, unequivocally wrong. It’s inconsistent with our values as a nation—a nation which you are helping to build. This is your country, too. I’m proud to be your fellow American. And many, many other Americans feel the same way.”

It can be so easy to let our collective fear of terrorism in our own backyard cast out Muslims as the enemy, all because one group of extremists have claimed that they are killing in the name of Islam. But when we remember that the very people Trump is so blatantly ostracizing are actually people who were born in the United States, who attended American schools and were raised with the same American values as everybody else, who get up and go to work everyday to provide for their families, who drive their kids to soccer practice and watch on proudly at their children’s dance recitals, and who hate that there are people out there shooting up concert venues and holiday parties just as much as everyone else, the absurdity of Trump’s plan really becomes apparent.

We should remember this — we should remember the reality of who the vast majority of Muslims in this country actually are — because those very people are the ones being turned on, ostracized, and discriminated against in public by people who are convinced they are the enemy (or who, at the very least, are too afraid to speak up on the behalf in the face of this discrimination): "Just a few days ago," Clinton writes, "two young women wearing headscarves were trying to have breakfast at a café near the University of Texas at Austin when another diner started shouting racist things at them. The girls left in tears — in part because of the ugly words, but also because no one else in that crowded café came to their defense.

As they left, one of the girls asked the room, 'Who cares about us?' Somebody called out, Nobody.' 'We left,' they said, 'because it was true.'

Not only should this not happen here, not only does nobody deserve to be treated so horribly for doing nothing other than wearing a hijab out to breakfast, or having a skin color that happens to not be white, but it shouldn’t be encouraged by someone who could actually become president.

Regardless of your political leanings, or your views on Clinton as a candidate, her latest message to Americans (and the world, really), is important. And we need to listen.