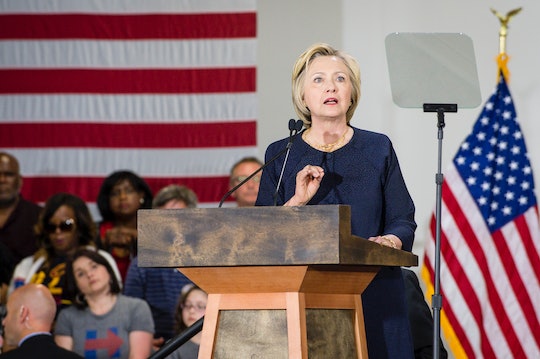 Hillary Clinton opened up her national security speech from Ohio this afternoon with her prescription for combating the "lone wolf" style attacks, like the one from last weekend that killed dozens of innocent people in an Orlando night club. In the speech she called for more resources to help law enforcement and better coordination between local and federal law enforcement. But it was Hillary Clinton's call for an assault weapons ban that showed how passionately she feels about the issue of gun safety.

And the NRA needs to consider itself on notice: Clinton isn't backing down. Which is just what she told the crowd, in no uncertain terms.

She also called assault rifles like the AR-15, used to carry out both the attack in Orlando as well as so many other mass shootings including Sandy Hook, San Bernardino, and Aurora, Colorado, to be taken off the streets. She called them "weapons of war."

Here's how Clinton describes assault weapons on her candidate site.

"Military-style assault weapons do not belong on our streets," it reads. "They are a danger to law enforcement and to our communities."

It was Clinton's husband, President Bill Clinton who first signed an assault weapons ban into law as part of the controversial 1994 crime bill and expired in 2004. But according to the Washington Post's reporting, the assault weapons ban had huge loopholes (for instance it didn't cover the millions of automatic weapons already in private hands), and, according to experts quoted in the Post, arguably did little to reduce crime. There is some evidence the assault weapons ban might have prevented some mass shootings, except for 1999's Columbine massacre.

But it can't be overlooked that the recent staggering numbers of mass shooters being armed with semi-automatic weapons like the AR-15 should say something about our gun laws. The AR-15, for instance, can fire up for 45 rounds per minute, according to Slate. Armed with only a handgun, these shooters would be easier to stop and far less lethal, Clinton and other supporters of bringing back the assault weapons ban argue.

Regardless of which side of the argument you're on, Clinton used Monday's speech in Cleveland to let everyone know she will continue to make gun safety legislation a central theme of her campaign and that she isn't going to back down from this fight.