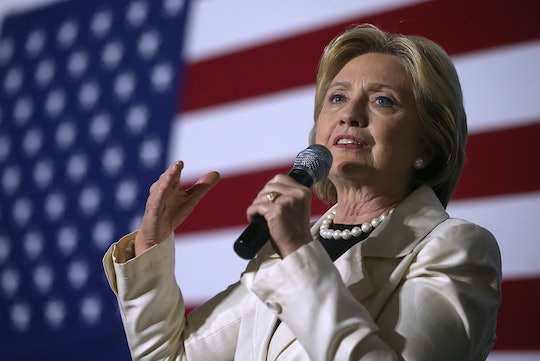 Hillary Clinton Criticized The Lack Of Abortion Talk In The Debates, & It Was A Big Moment

Even though reproductive rights and access to legal abortions are a huge issue in the United States right now, you wouldn't really know it if all you had to go on was the Democratic presidential debates. So when former Secretary of State Hillary Clinton criticized the lack of abortion questions in Thursday's debate, it's no surprise that it earned huge cheers and applause from the crowd. According to Think Progress, even though technically both Clinton and Vermont Sen. Bernie Sanders were asked about their stance on abortion in April at a Fox News Town Hall, not one question from any of the nine official Democratic debates was about abortion. So, following an answer she gave about the Supreme Court, Clinton went ahead and raised the issue herself — and it was a pretty impressive moment for women's rights advocacy:

I want to say something about this, since we're talking about the Supreme Court and what's at stake. We've had eight debates before, this is our ninth. We've not had one question about a woman's right to make her own decisions about reproductive healthcare. Not one question. And in the meantime, we have states, governors, doing everything they can to restrict women's rights.

Regardless of your stance on Clinton as a candidate, her decision to call out the moderators for not even asking about abortion was absolutely a mic drop moment. The state of women's reproductive rights is an issue of huge concern right now for Democrats, as safe abortions are becoming increasingly harder and harder to access. According to NPR, the Texas Omnibus Abortion Bill (aka, HB 2) — which requires all abortions to occur in ambulatory surgical centers (completely unnecessarily, according to the American Medical Association, the American Academy of Family Physicians, and the American College of Obstetricians and Gynecologists) — could end up reducing the number of abortion clinics in the state from the already-small number of 19 to only nine. If the ruling is upheld by the Supreme Court, safe abortions would become almost impossible for many women in the state to access. And Texas is not alone: 13 other states have enacted similar laws.

But that's not all that's at stake, of course. In January, the House voted 240-181 to stop all federal funding of Planned Parenthood, according to USA Today, before it was vetoed by President Obama. Had Planned Parenthood been successfully defunded, the 4,665,000 Americans who rely on Planned Parenthood for not only abortion, but reproductive healthcare services like contraception, pap smears, pregnancy tests, and STD tests, would have been left to find an alternative (or, in many cases, likely left with nothing at all).

Following Clinton's remarks, Sanders reminded voters that he "proudly has a 100 percent pro-choice voting record," and also extended his comments to include LGBTQ rights:

You're looking at a senator and former congressman who...will take on those governors right now who are discriminating outrageously against the LGBT community. Who comes from a state that led the effort for gay marriage in this country. Who not only thinks we are not going not defund Planned Parenthood, we've got to expand funding for Planned Parenthood.

But according to Mother Jones, despite the overlap in Clinton's and Sanders' view on reproductive rights, the comments from the Fox News Town Hall suggest that there might also be some significant differences too. When asked about his stance on abortion rights, Sanders stated he was against any and all restrictions (which would include state laws currently in existence against late-term abortion). Clinton's stance, on the other hand, was more complex. Although she was clear to defend a woman's right to an abortion, when asked specifically whether she was also against all restrictions, she answered:

No — I have been on record in favor of a late-pregnancy regulation that would have exceptions for the life and health of the mother.

This difference can be significant for voters on either side of the fence about late-term abortion. As Everyday Feminism noted, there is immense stigma surrounding late-term abortion, along with many, many misconceptions (no, late-term abortions are not common, they are not used as a form of birth control, and they often occur in pregnancies that were intentional and where the baby was very much wanted). But, given that abortion (especially late-term abortion) is such a controversial-yet-important topic, the fact that it has never even been brought up before Clinton's remarks Thursday is baffling and eye-opening.

Whether you're #feelingtheBern or firmly #teamClinton, it's pretty clear that Clinton's abortion remarks at the Democratic debate were an important moment for the presidential candidate. And hopefully they will mark the beginning of a much broader discussion about reproductive rights, because there really is so much at stake for women in this election.