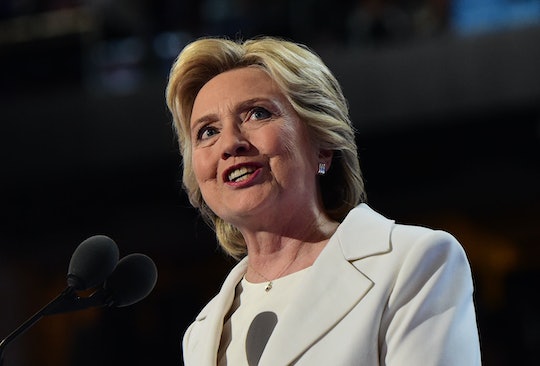 Vaccines are a highly controversial subject. The debate on whether or not to vaccinate your child is one that is shrouded in a lot of confusion and misinformation. As rumors and myths pertaining to vaccinations continue to spread, the discussion about vaccines is more critical than ever — especially in this upcoming election. So it came as a surprise to learn that Hillary Clinton is the only candidate supporting mandatory vaccines in this presidential election — which is so important for so many reasons.

In 1998, Dr. Andrew Wakefield — who Newsweek calls the "father of the anti-vaccine movement — published a study in a British medical journal that linked vaccines to autism. His study has since been retracted and Wakefield lost his medical license after it was reported that he "misrepresented or altered the medical histories" of those participating in his study. Even though the study has been discredited, the study was enough to still have an effect on some — including those running for president of the United States in 2016.

Out of the Democrat, Republican, Libertarian and Green party candidates that are running for president, Hillary Clinton is the only candidate to support mandatory vaccinations. In February 2015, Clinton sparked controversy after tweeting that vaccines work.

According to Mother Jones, Clinton has long been an advocate for children to be vaccinated. In 1993, Clinton "spearheaded the Childhood Immunization Initiative and the Vaccines for Children program which aimed to make vaccines affordable." This is great news. Other candidates, however, haven't been so supportive of vaccines.

During an early Republican debate last year, Donald Trump said some pretty nonsensical things about vaccines and autism — even going as far as to say he knew a child who got vaccinated and got autism one week later...? While he did state that he is in favor of vaccination, he didn't specify whether or not he was in favor of mandatory vaccinations, telling debate audience members:

Autism has become an epidemic. Twenty-five years ago, 35 years ago, you look at the statistics, not even close. It has gotten totally out of control. I am totally in favor of vaccines. But I want smaller doses over a longer period of time. Same exact amount, but you take this beautiful little baby and you pump — I mean, it looks like it was meant for a horse, not a child, and we've had so many instances, people that work for me.

Green Party candidate, Dr. Jill Stein, is more skeptical about vaccines — believing that they are necessary but should require a lot more regulations. Telling the Washington Post:

I think there is no question that vaccines have been absolutely critical in ridding us of the scourge of many diseases — smallpox, polio, etc. So vaccines are invaluable medication. Like any medication, they also should be — what shall we say? — approved by a regulatory board that people can trust. And I think right now, that is the problem.

Stein continued about her skepticism:

As a medical doctor, there was a time when I looked very closely at those issues, and not all those issues were completely resolved. There were concerns with physicians about what the vaccination schedule meant, the toxic substances like mercury which used to be rampant in vaccines. There were real questions that needed to be addressed. I think some of them have been addressed. I don't know if all of them had been addressed.

Libertarian candidate and former New Mexico Gov. Gary Johnson has been pretty quiet on his stance on vaccinations. He did, however tweet in 2011 a pretty cryptic "No to mandatory vaccines." The context of the tweet is not clear nor is his stance — as the statement was made five years ago.

While Hillary Clinton is the only presidential candidate to outwardly support mandatory vaccinations, the other three major party candidates have expressed their concern to regulate and limit vaccines. In this election, it is incredibly important to be educated on the stances of party's candidates — especially those who cite discredited studies.