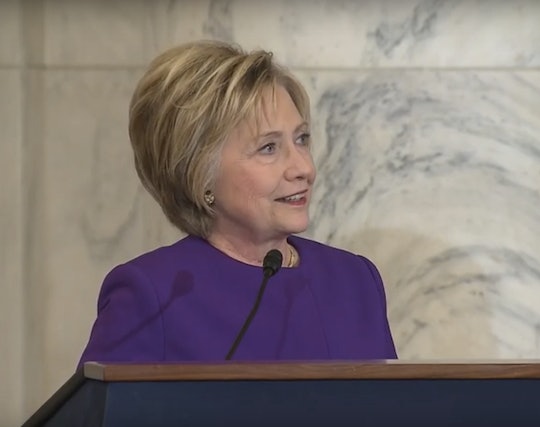 In her second public appearance since conceding the election to Donald Trump, former presidential nominee Hillary Clinton made light of her recent defeat. "This is not exactly the speech at the Capitol I hoped to be giving after the election," she told the audience at an event honoring leaving Senate Minority Leader Harry Reid, "but after a few weeks of taking selfies in the woods, I thought it would be a good idea to come out." The lighthearted nature by which Clinton joked about emerging from the woods — where she's been spotted near her home recently, on a number of walks — is really just a little bit heartbreaking, especially given how her consistent composure and ability to joke about things post-election so far has been totally admirable.

Clinton didn't use her speech for jabs at her own situation alone. She also opted to spread a message about the dangers of fake news. "'Fake news' can have real world consequences," Clinton asserted. "This isn’t about politics or partisanship. Lives are at risk. ... [It] must be addressed, and addressed quickly."

Specifically, lives have been put at risk by "Pizzagate," a conspiracy theory which inspired an armed man to allegedly enter a pizza place in order to investigate unfounded rumors that a child sex ring was operating under Clinton's knowledge. "It is imperative that leaders in both the private and pubic sector step up to protect our democracy and innocent lives," Clinton told Thursday's audience.

The video below shows Clinton's self-aware intro, as well as her welcome:

Clinton entered to a standing ovation, as her supporters were very apparently happy to see her. Lately, she's been opting to stay a bit more secluded, keeping to her home base in Chappaqua, New York. Since her first day post-election, when she was spotted in the woods walking her dogs, Clinton's been seen in the woods on plenty of other occasions, always ready to take selfies with supporters and offer them encouraging words. Right before Thanksgiving, Clinton's was seen at a local grocery store and offered photos and advice. "We must stay strong together no matter what. Thank you for your support," Clinton reportedly told her fellow shoppers.

Clinton's heartbreaking loss is perhaps made even more so by her estimated 2.6 million popular vote lead, which continues to grow. Her resilience in spite of everything is admirable, as is her willingness to address uncomfortable and necessary issues. Despite the fact that she wasn't able to win the electoral vote, Clinton seems ready to use her voice once more, exhibiting grace in all accounts, to share relatable moments and important information with the American people.