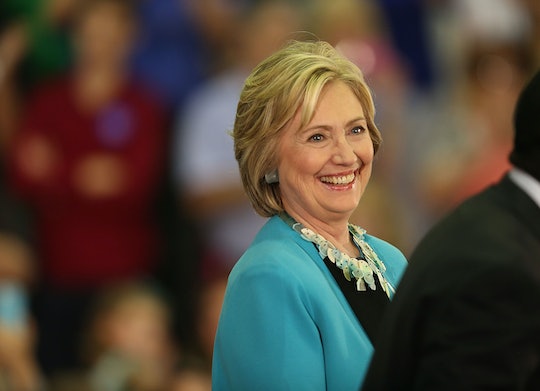 Hillary Clinton Laughs When Supporter Jokes He Wants To "Strangle" Carly Fiorina, But GOP Is Taking It Seriously

The 2008 election wasn't a particularly friendly one. When John McCain and Barack Obama faced off — with Sarah Palin and Joe Biden at their respective sides to lob insults at the other party — we were met with nasty politics, and an even nastier constituency who uttered words like "terrorist" to talk about the competition. Still, at a rally, when a McCain supporter called Obama an "Arab" and others called him a "terrorist," McCain sided with the future President, calling him a "decent person" who voters didn't have to be "scared of." It's a moment that's easy to recall during Tuesday's news cycle, when headlines hit that Hillary Clinton laughed at a joke about strangling Carly Fiorina.

It's not quite the move you would expect from the candidate, who has been able to navigate nearly everything smoothly along this 2016 campaign trail — the email criticisms, the 11-hour Benghazi accusations, the Bernie Sanders competition to name a few. But a gaffe like this only seems to cement the image that Clinton has amongst voters and press, one that turns her from accomplished Secretary of State/grandmother to cold and calculating politician. And it certainly doesn't help that her competition has an example on the right to point to of perhaps how one should navigate this situation. (See, the above paragraph.)

So what exactly happened Tuesday? A former Hewlett-Packard employee, who claimed he was laid off while Fiorina headed up the company, told Clinton:

She says she's a great CEO. Every time I see her on TV, I want to reach through and strangle her.

Cue the laughter. And Clinton's laughter. Because violence — something 35 percent of women have faced worldwide — is hilarious? Uncomfortable laughter is one thing, but Clinton followed up the man's "joke" about Fiorina by telling him, "I wouldn't mess with you!" Not quite the response you would hope for from one of the biggest champions of women in Washington, D.C. And from a woman who wrote the following for The Guardian in 2011:

This year, let us renew once again our commitment to end the abuse that traps so many women and girls around the world. Let us call out the culture of impunity that perpetuates this cycle of violence. And let us work together, in partnership, to make all forms of violence a thing of the past.

It's no surprise that the GOP is taking this opportunity to criticize Clinton for the moment, with the Republican National Committee's Allison Moore saying in a statement:

By laughing off a male questioner's desire to strangle Carly Fiorina, Hillary Clinton and the Democrats have lost all credibility claiming to be a party that stands up for women.

Of course, Clinton's gaffe doesn't undo all of the hard work she's done to support women throughout her time in Washington, D.C., but is no doubt an annoying setback on the campaign trail. But Clinton is laughing off the situation too. She simply told reporters afterwards that she didn't think the supporter would actually want to harm Fiorina, and Clinton's spokespeople have brushed off the moment as a "joke" and a "figure of speech." Said Christina Reynolds in a statement to CNN:

Hillary Clinton doesn't hesitate to speak out against hateful or threatening rhetoric, but this vet did not intend to express either of those things, and Republicans should not try to pretend otherwise.

How will Clinton navigate this one? Well, hopefully smooth from here on out. As CNN notes, it's easy to point to Fiorina's own gaffe, in which she stayed silent when a supporter called Obama a "Muslim" in New Hampshire, and if Clinton can survive an 11-hour questioning with aplomb, she will likely get over this. After all, let's remember that this is how Clinton reacts to GOP criticisms.