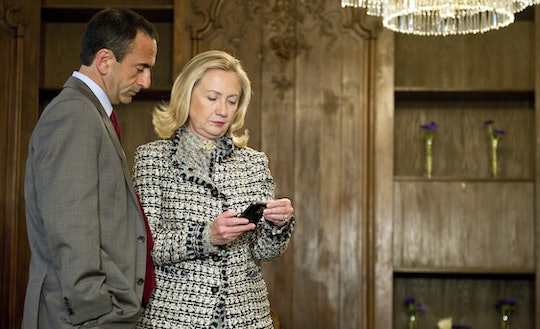 Following her awesome rebuttals and master-level use of a gif while tweeting through the last GOP national debate, the expectations for Hillary Clinton’s live-tweeting during tonight’s Fox Business-hosted debate were high. And Hillz didn’t disappoint. While the Republicans presidential tackled topics related to the economy, the Clinton campaign reminded the Twitter crowd there is yet another important point-of-view to consider — Clinton’s.

Going into the fourth GOP debate, it was clear Clinton — who is firmly leading national polls for the Democratic nomination — was going to be a target. Heck, the Republican National Committee even made reporters covering the event use “Stop Hillary” as the WiFi password. Clinton returned a bit of fire, but also managed to keep the tweets focused on the issues. It should be noted that the responses didn’t some directly from Clinton — those messages are typically noted with the “-H” signature. But I'd like to think she'd approve of these sentiments.

And because it would have been a crime to let Hillz’s Snapchat story go unnoticed, the Clinton Camp also retweeted this message...

The GOP crowd will have the perfect chance to return to favor to Clinton during the next Democratic national debate on Saturday, November 14. Although debate responses from Donald Trump, who you would think would have a knack for these kinds of things, were quite underwhelming last time. Score another one for Clinton.