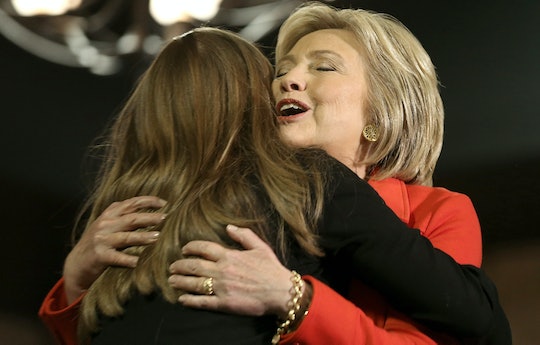 As the front-runner for the Democratic nomination in the 2016 election, former Secretary of State Hillary Clinton could possibly be the first female president the United States has ever had. But, as she often notes in speeches and interviews (and even in her Twitter bio!), she's also a proud mother and grandmother, intimately understanding what it feels like for all of the other women who also have those roles in their own lives. That's why Hillary Clinton's quotes about motherhood are so important to hear: for the first time, women aren't just hearing from men who say they "respect" women (or, if you're Mitt Romney, that you have "binders full of" them); they're actually hearing from someone who has experienced what it's like to be a mother — even if, to be fair, her experience of motherhood was decidedly more privileged than most.

Have kids quickly teaches you how all-consuming parenthood can be, and how difficult it can feel at times to find balance — to maintain your own identity while also being the best parent you can be for your children. That's why hearing Clinton speak about motherhood is so valuable, and why some of these quotes are likely to resonate with women everywhere, even those who aren't staunchly #TeamClinton.