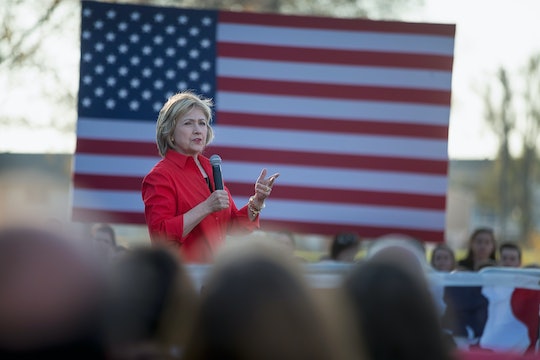 The GOP debate featured all the typical, predictable gaffes, interruptions, and sheer avoidance of the word "climate" that we've come to expect from the Republican playing field. But there was one person who managed to take hold of the spotlight without ever stepping on stage: Hillary Clinton. The Democratic presidential hopeful took to social media to offer her thoughts, and Hillary Clinton's Twitter response to the GOP debate proved, once again, that the Republican playing field has a long way to before she views them as a threat.

No matter what they're talking about, it seems like the Republican nominees find a way to squeeze in some mention of the former Secretary of State. It could be raining and somehow, someway, the Republicans would find a way to turn the blame to Hillary. They consistently, no matter the topic at hand, find a way to dissect her policies, carve into her persona, question her morals, and for the love of pete, they literally cannot get over her emails. Would not be surprised if Hillz ears are always ringing, because that's how often she is talked about.

In case you think Clinton is too political to be amusing, her hilariously on-point tweets prove otherwise. (Well, they at least prove that she's not too uptight to hire funny, hip people to draft tweets for her, and like, that's fine; you don't have to be good at everything.) There's a little something there for everyone, and tonight, she somehow managed to say what everyone was thinking every minute of the debate, addressing both the political fecal matter that was spewed throughout the debate as well offering humor to the ridiculousness.

Tonight, like on so many other debates past, Hillary took to Twitter to respond to all the commentary stacked against her. It was hilarious, so very Hillary-like, and generally just a perfect response. Excuse me while I bow down to her social media prowess, because this is just that good:

And that's pretty much all we need to say about that. GOODNIGHT, WISCONSIN.