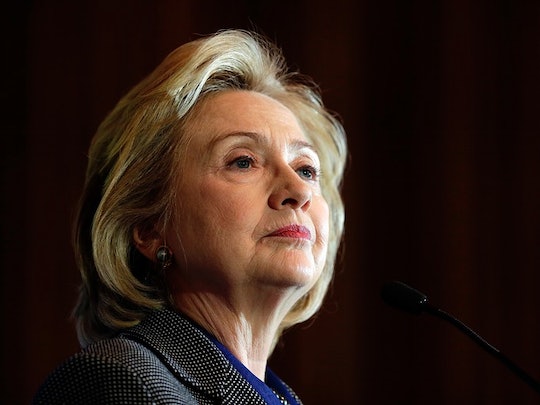 At the Council on Foreign Relations in New York City on Thursday, Hillary Clinton revealed her plan for dealing with ISIS, reports NBC News. "This is a worldwide fight, and America must lead it," said the former Secretary of State and frontrunner for the 2016 Democratic presidential nomination. Unlike President Obama, she said, her goal is not to "contain" ISIS, but to "defeat and destroy" them. "We cannot allow terrorists to intimidate us into abandoning our values and our humanitarian obligations. That is just not who we are. We are better than that."

However, she said she agrees with the president that the U.S. shouldn’t send hundreds of thousands of ground troops to Syria. "That is just not the smart move to make here," she said. Instead, she would continue airstrikes, and utilize the 50 Special Forces that have already been deployed to the area. She also called for the Arabs and Turks to "step up," saying, "This is their fight and they need to act like it."

As for the ground campaign in Iraq, Clinton said that it will “only succeed if more Iraqi Sunnis join the fight,” according to the New York Times. The Guardian reports that Clinton said she would arm Kurds and Sunni tribes if Iraq didn’t.

Clinton also called on Russia to assist with the fight in Syria. "Cutting off the supply lines, trying to supply some refuges for refugees, creating a safe space away from the barrel bombs and other bombardments… And I would certainly hope to work with the Russians to do that. The Russians, as you know, have been primarily focused on Assad’s enemies, and not on ISIS, and I think that has changed. I think there’s an indication that has changed." She called on Russia to help enforce a no-fly zone over Syria.

This, not surprisingly, is a vastly different plan from the ones espoused by candidates for the GOP nomination. Donald Trump would “just bomb those suckers," he said last week, according to CNN. "That's right. I'd blow up the pipes, I'd blow up the refineries, every single inch, there would be nothing left." He would also send ground troops to Iraq. Ben Carson, too, would send troops to Iraq. Florida Senator Marco Rubio would send more Special Forces to Syria, and South Carolina Senator Lindsey Graham wants to send “10,000 troops” to both countries. Ted Cruz has an… interesting idea: he would only allow Christian refugees into the United States, which Clinton notes “plays into [terrorists’] hands."

“We are in a conflict of ideas against an ideology of hate,” Clinton said, “but let me clear, Islam is not our adversary.”

More Like This
Disney Revealed A Bunch Of Exciting Details About The New Princess & The Frog Ride
Ireland Baldwin Shares Her Abortion Story In An Emotional TikTok
Is It Safe To Keep Using Period & Fertility Apps In A Post-Roe America?
Some Movie Theaters Are Banning Teens Dressed In Suits As Part Of Viral 'Minions' Trend