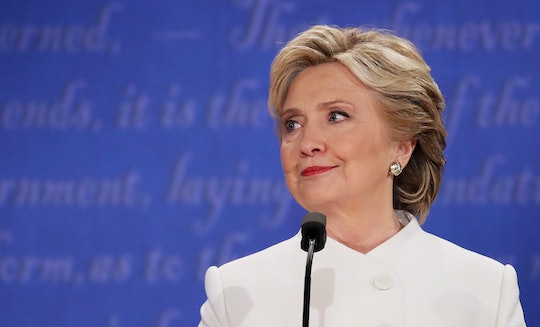 I was a 23-year-old adult when I had an abortion. I was fresh out of college, in an unhealthy relationship, living paycheck-to-paycheck and terrified. I didn't want to be a mother, knew I couldn't be a mother, and my partner didn't want to be a father, either. So, it should come as no surprise that I was thankful when Democratic presidential nominee Hillary Clinton said what no one will about late-term abortions during the last debate, when abortion was finally discussed on a national stage by Republican presidential candidate Donald Trump and Clinton. As a woman who has had an abortion and a mother who now has a 2-year-old son, it was important to me that abortion not only be discussed, but discussed accurately.

The kinds of cases that fall at the end of pregnancy are often the most heartbreaking, painful decisions for families to make. I do not think the United States government should be stepping in and be making those most personal of decisions. You can regulate if you are doing so with the life and the health of the mother taken into account.

However, abortion is still a stigmatized choice that women in the United States are either shamed for, judged by, or kept from, thanks to Target Regulation of Abortion Provider (TRAP) laws and unnecessary restrictions that make it financially impossible for women of color and women in low socioeconomic situations to take advantage of. Many of the TRAP laws and social stigmas are perpetuated by the very lie Trump told during the third and final debate Wednesday night in Las Vegas. When asked about appointing a Supreme Court justice and whether or not he will appoint a judge that is pro-life, Trump told the American public:

The problem with Trump's answer? That's not how abortion works, and the rhetoric Trump evoked in an attempt to scare and shame women who have late-term abortions is horrifically inaccurate at best, and dangerous at worst.

I was 20 weeks pregnant when I was told that my baby could have a heart defect that would've made it impossible for him to survive outside of the womb if was, in fact, born with that medical condition. I was devastated and I was scared, yet I was comforted by the knowledge that I could end my very wanted pregnancy and protect my son from ever experiencing an ounce of suffering.

Trump wouldn't understand anything about that choice, nor would he know what it's like to experience a pregnancy (wether it's wanted or not). Thankfully, Clinton does and, even if she hasn't experienced an abortion or a late-term abortion, she's unapologetically fighting for a woman's right to choose while simultaneously remaining cognizant of how difficult those decisions can be for women (especially women who have late-term abortions).

My abortion was not late term. I was less than seven weeks pregnant when I made a call to Planned Parenthood and scheduled a safe, legal, and affordable abortion. However, I was 20 weeks pregnant when I was told that my baby could have a heart defect that would've made it impossible for him to survive outside of the womb if he was, in fact, born with that medical condition. I was devastated and I was scared, yet I was comforted by the knowledge that I could end my very wanted pregnancy and protect my son from ever experiencing an ounce of suffering.

Thankfully, my baby was misdiagnosed — we found out at 25 weeks that his heart was normal and he would be fine — and I didn't have to make the decision that a small percentage of women who choose abortion have to make.

However, the constitution right and whether or not it's "OK" to have an abortion at any point during a pregnancy (wanted or not) is not the most upsetting part of the somewhat short discussion of women's rights that took place during the last presidential debate. Trump's description of late-term abortions was inaccurate to an incredible degree, and adds another level of shame to women who are faced with these intimate, personal decisions. Abortions administered after 20 weeks are often performed one of two ways: dilation and extraction or dilation and evacuation. Babies aren't "ripped apart" and they're not "torn from women's wombs" and fetuses aren't made to suffer. These are all descriptions that push an anti-choice agenda and perpetuate fictitious notions about medical procedures that save women and keep babies from suffering outside of the womb.

At 23 years old, I was thankful to have the option to end an unwanted pregnancy in its early stages. As a 27 year old, I was comforted knowing I had the ability to choose a late-term abortion due to a medical necessity. Clinton knows how important and vital these decisions are for women, and why it's important that these decisions remain with the only people who will experience the ramifications of them: women.

However, Trump says late-term abortions "aren't OK with him." Him. A man. One who will never know what it's like to experience pregnancy and who'll never know what it's like to hear that your fetus might have (or does have) an abnormality that will keep it from surviving outside the womb. Someone who thinks he's capable of making decisions for women about their own bodies.

I was a 23-year-old adult when I had an abortion. I'm a 29-year-old mother of a 2-year-old son now, and hearing what Trump thinks and believes about abortions and women's bodies illuminates exactly what we're fighting for in this election. More than just standing with a candidate who supports my rights, I stand with a woman who believes in them. After tonight, I realize that's far more than I can say for a man like Trump.