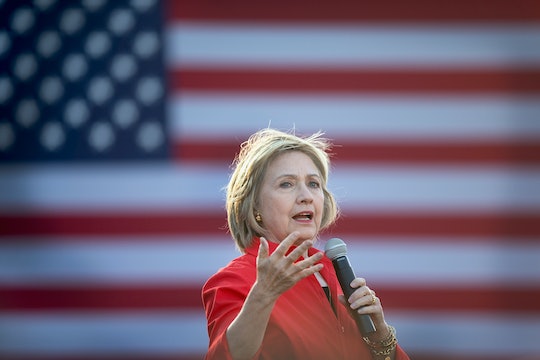 Hillary Clinton Says Anti-Discrimination Is 'Next Fight' For LGBT Community

There’s something to be said for getting candidates one-on-one. They get a chance to talk without too much noise. Taking full advantage of that safe space during MSNBC's Democratic Candidates Forum Friday night, Hillary Clinton said that "next fight" after same-sex marriage is to end discrimination against LGBT individuals. Interviewer Rachel Maddow asked Clinton about the vote in Houston Tuesday that repealed an ordinance protecting trans people's right to use the bathroom that matches their gender identity, among many other protections for a number of groups. Clinton promptly took the opportunity to clarify where she stands when it comes to discrimination and gay marriage.

On HERO, the Houston ordinance voted down Tuesday, Clinton said, “What the far right did very successfully is really to engender a lot of fear and a lot of anxiety and create this backlash against the ordinance.”

Hillary has been scrutinized for the long road she has taken in support of gay marriage and LGBT rights. During Clinton’s appearance on Saturday Night Live last month, one of the favorite punch lines dealt with Kate McKinnon's Hillary Clinton character teasing Clinton herself that it took her a little longer than it should have to come around to publicly express her support for the LGBT community.

There's also her husband's past to deal with. President Bill Clinton was in support of the Defense of Marriage Act in 1993. Friday Hillary told Maddow that her husband supported the bill in an effort to block a Constitutional amendment that would have banned same-sexmarriage altogether.

But all of that’s history now, right?

Hillary pivoted very quickly from the past and went right into how the fight against discrimination should move forward. While marriage is no longer an issue, she said:

What we haven’t yet done is to deal with the discrimination that still exists and try to figure out how you can help people who can now legally get married on Saturday and then get fired on Monday.

In her campaign for the presidential nomination, tonight she made very clear where she stands and voters are starting to notice, though not everyone is convinced that she's entirely sincere:

Clinton's long political past means that she will be defending her, and her husband's positions, for the entire campaign (and the rest of her career). Whether sincere or not, she made her stance very clear tonight. No turning back.

More Like This
What Foods Fight Nausea During Pregnancy?
Here’s Why You & Your Mom Can Fight So Much
Meghan Trainor Shares Baby News After Dropping Hints On TikTok
Michigan Right-Wing Group Wants To Erase LGBTQ+ Sex Ed
What Parents Are Talking About — Delivered Straight To Your Inbox