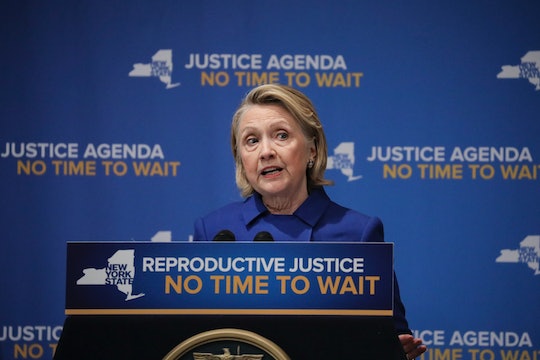 On Saturday, the partial government shutdown reached day 22, meaning it had officially become the longest government shutdown in the nation's history. Despite nearly 800,000 federal workers now either furloughed or being expected to continue to work without pay, according to CNN, the worst part might actually be that there doesn't seem to be an end in sight — and it's that lack of progress which led Hillary Clinton to take to social media. Hillary Clinton spoke out against the government shutdown on Twitter this weekend, and urged Americans to contact their representatives to "demand a vote" and finally bring it to an end.

In her post, she noted that the ongoing shutdown is having serious effects, and wrote, "People are missing paychecks, losing business, or working without pay," and added that the nation's national parks, national security, and even the safety of the country's food supply were at risk. In a follow-up tweet she wrote that "Americans can't afford another day," and urged social media to call the Capitol switchboard to contact their representatives and insist the Senate get things back on track. Clinton also took aim at Senate Majority Leader Mitch McConnell, and wrote, "Make sure your friends and family in Kentucky call @senatemajldr," followed by phone numbers to the senator's offices.

But it sounds like doing so might not get anyone very far: on Saturday, Newsweek reported that McConnell is "nowhere to be found" after leaving Washington Friday — without giving his usual remarks on the Senate floor that morning — and heading back home to Kentucky. In his absence, Senate Democrats have accused him of shirking his responsibilities, and in the Senate Friday, Maryland Sen. Chris Van Hollen specifically called out McConnell for being "AWOL in the middle of this shutdown."

Judging by a tweet Van Hollen shared Saturday, he seems to agree with Clinton on the need for a vote. He wrote that the shutdown was a "shameful historical milestone" and said that the Senate would "again move to vote on the two bipartisan House bills to end the shutdown" in the coming week, before calling on McConnell to "stop being an accomplice to the Trump Shutdown."

Trump himself though is certainly not budging, and, in fact, his own Twitter advice Saturday was not entirely dissimilar from Clinton's. Having firmly dug his heels in on the matter, the president wrote, that "Democrats could solve the Shutdown in 15 minutes," and that Americans should "[call their] Dem Senator or Congresswoman/man" to "tell them to get it done." In fact, he even referred to the shutdown as a "humanitarian crisis," despite the fact that he's previously taken a pretty dismissive view of the situation.

When discussing the potential end to the shutdown during a news conference earlier this month, for example, Trump said, "We’ll see what happens. It may get solved; it may not get solved," according to The Washington Post. Later in the day Saturday, he followed up on his original tweet to write that he "[does] have a plan on the Shutdown," but that the plan is based on the fact that "[he] won the election," and that "elections have consequences."

Clinton is far from being the only high-profile critic of Trump and the shutdown, but earlier this week, she was able to use her platform to support organization helping children and families at the southern border where the president is so dead-set on building a wall. On Jan. 8, Clinton urged Twitter users to "fight back against Trump's ridiculous address" about immigrants and border security by making a donation to ActBlue charities, and a day later, she posted that over $100,000 had already been raised.

Let's face it: regardless of where you stand politically, pretty much everything about the partial government shutdown is frustrating, and if you're a federal employee, or someone else directly affected by it, it might even be crippling. But despite the seeming lack of movement, Clinton's message is one that matters. At the very least, after all, we can continue to try to make our voices heard, and let the politicians involved that this cannot continue.