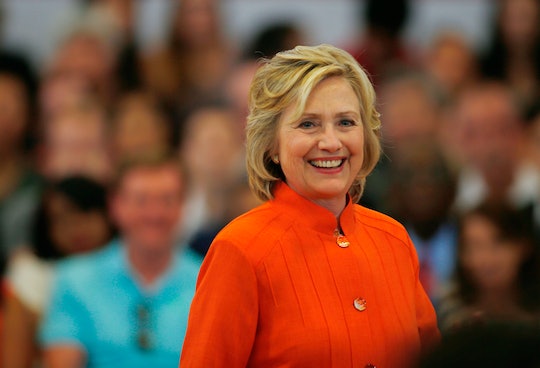 Hillary Clinton Stopped By The 'Broad City' Set, & It Was Awesome

On Friday afternoon, the frontrunner in the Democratic primary made one very important pit stop on her political tour: Hillary Clinton visited the set of Broad City to film a scene for an upcoming show. (Say what?!) According to Clinton’s Twitter account, Clinton and Broad City’s Abbi Jacobson and Ilana Glazer are “best friends.” Add executive producer Amy Poehler to the mix, and that is one #girlsquad I’d kill to be a part of!

The possibilities for what shenanigans Hillary, Abbi, and Ilana will get into are endless — though somehow I think the show's overarching themes of sex and pot will be tucked very neatly under the rug for the duration of the episode. Personally, I'd LOVE to see Abbi take Hillary to Bed Bath & Beyond and share its glory to her — if the former Secretary of State doesn't already know about it.

(Hillary has to know about Bed Bath & Beyond and their immortal coupons. Right? RIGHT?!)

While it is unclear what type of role Clinton will play — aside from the obvious “bestie” — or how large or small her part is, it's bound to be a wild ride.

Clinton has been making the television rounds lately. She appeared on the “Late Night with Seth Meyers” earlier this week, on “Jimmy Kimmel Live!” in November, and in October Clinton visited the set of “Saturday Night Live” (appearing in a sketch alongside Kate McKinnon, i.e. herself). But her upcoming appearance on Broad City has me pumped. (Seriously, I think I am too excited about this.)

No word on when Clinton's episode will air, but season three of Broad City will premiere at 10P.M. on February 17, 2016 (Comedy Central).