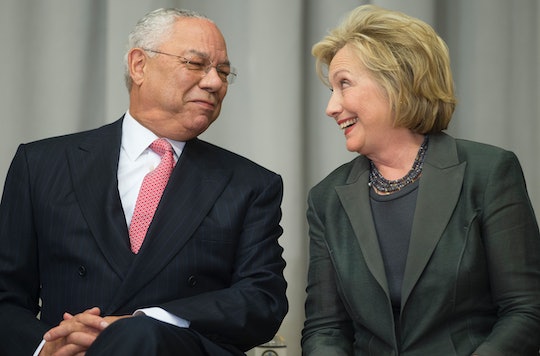 With fewer than two months until Election Day, Democratic presidential nominee Hillary Clinton still can't escape questions about her emails. But as another former Secretary of State navigates an email crisis of his own, Clinton still refuses to take advantage of it. Instead Colin Powell's email hack sparked Clinton's sympathy, an example of a candidate taking the high road during an increasingly brutal campaign.

Following a hack, a number of Powell's private emails were shared on website DCleaks, according to CNN. The leaked writings included the retired general's opinions on both Clinton and Republican presidential nominee Donald Trump, many of which were highly critical. Trump's response to Powell's emails came Wednesday on Twitter, People reported. "I was never a fan of Colin Powell after his weak understanding of weapons of mass destruction in Iraq = disaster," Trump tweeted. "We can do much better!"

Conversely, Clinton opted not to respond directly to any of what Powell wrote about her, according to Politico. During an interview on Wednesday taped for The Tom Joyner Radio Show, Clinton said, "I'm not going to comment on anything that is said in a private email." She explained that she respects Powell and sympathizes with "anyone whose emails become public." Rather than being concerned about the content of Powell's emails, Clinton said the leak potentially signals a much bigger problem:

What I think is really important about the emails is the chilling fact, Don, that the Russians are continuing to attempt to interfere in our election. And I have to say I’m increasingly concerned by how we’ve seen Donald Trump’s alarming closeness with the Kremlin become more and more clear over the course of this campaign. It’s deeply concerning.

Powell has played a part in the conversation ever since questions first arose about whether Clinton appropriately handled email while serving as Secretary of State. Back in March 2015, an aide released a statement saying that Powell used a personal email account while in office and did not know of "any restrictions," Politico reported. The details of Powell's email use are different. In an interview on Meet the Press, Powell said that the State Department information system wasn't in good shape when he got there, and he led the way in updating it. The department got new computers, and Powell had two computers for his own use: "a secure State Department machine" and a laptop. Powell used the latter to email loved ones and would occasionally use it to send internal State Department "housekeeping" emails; the former he used for transmission of classified communications.

In August, The New York Times discovered that Clinton said Powell recommended use of a personal email account as Secretary of State. Powell told People that despite Clinton's team's attempt to "pin it on" him, "The truth is, she was using [the private email server] for a year before I sent her a memo telling her what I did."

Though Clinton and Powell have certainly had disagreements, Clinton seems to strongly believe that taking advantage of leaked emails isn't respectful or fair. It's a powerful example of political civility.