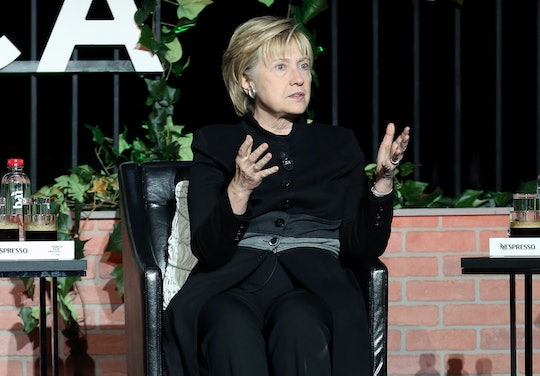 At the Women for Women event in New York on Tuesday, former presidential nominee and Secretary of State Hillary Clinton rehashed the ups and downs of the 2016 election with CNN's Christiane Amanpour. The two discussed Clinton's loss, and the various reasons that contributed to the final result. As Hillary Clinton talked about the election and the misogyny, and all that she learned in her campaign for president, her overall message warned the United States not to move backward, regardless of whoever the leader in office may be.

Though she claimed to admit "absolute personal responsibility" for the election results, Clinton was quick to acknowledge the various odds that were stacked against her. "If the election had been on Oct. 27, I would be your president," Clinton claimed, citing pre-election polls by Nate Silver that pitted her as the likely winner in the months leading up to the final vote. She noted that Russian interference and the Comey letter didn't help her out at all, and was sure to note the part misogyny played in her defeat, saying:

Yes, I do think it played a role. I think other things did as well. Every day that goes by, we find out more about the unprecedented inference, including from a foreign power whose leader is not a member of my fan club.

You can watch part of her interview with Amanpour below:

Clinton's currently writing a book about her campaign that will reportedly touch on all of these topics — Comey, Russian hacking, misogyny, and plenty more. Still, she maintains that her focus is still on what's to come, working for the greater good rather than staying stuck in past political missteps. "I’m back to being an activist citizen — and part of the resistance,” she shared with Tuesday's viewers, pledging her allegiance. Of course, President Donald Trump received a shout-out of his own. In addition to Clinton digging, "Remember, I did win more than 3 million votes than my opponent," she also criticized his foreign policy decisions.

Despite her bringing up popular vote counts, Clinton's advice to Trump urged him to move onto more important matters than what transpired between the two of them. "If he wants to tweet about me I'm happy to be the diversion because we've got lots of other things to worry about," she shared. "And he should worry less about the election, and my winning the popular vote, than doing some other things that would be important to the country."

This appearance marked a relatively rare event for Clinton, as she's spent plenty the majority of her post-election time out of the media spotlight. Her voice, though, is sorely needed; At a time when "going backwards" is a likely threat, it takes strong leaders to offer pushback, mobilizing in order to preserve the achievements that have been made and fight for new ones as well.