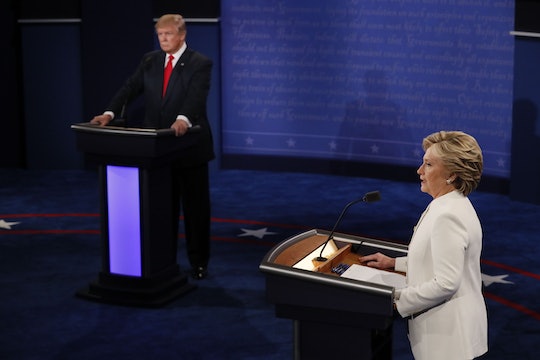 But more importantly, Clinton broke down what the Heller case was really about and told Wallace, "what the District of Columbia was trying to do was to protect toddlers from guns, and so they wanted people with guns to safely store them." Amazingly enough, Trump took the opportunity to pounce on Clinton's reaction to the ruling at the time — rather than speak specifically to the issue of gun safety itself — claiming that she was both "extremely upset and extremely angry" about Justice Scalia's decision. And folks on Twitter picked up on that right quick.

In the wake of failed gun safety regulation after shootings such as those at Sandy Hook Elementary School and the Pulse Nightclub, Clinton's reaction to Heller certainly made sense. Clinton noted that 33,000 people die every year in the United States from guns, and it's important to drill that number down even further with regard to her comments about gun safety and toddlers. Everytown for Gun Safety Support Fund, a non-profit gun safety watchdog group, reported that there have already been 204 child deaths involving guns in 2016. Breaking that sobering statistic down even further, that comes out to a child dying from gun accidents every other day from gun accidents in the United States, as noted in a joint investigation by the Associated Press and USA Today.

If Clinton is elected president, she has no intention of repealing the 2nd Amendment, despite all the saber-rattling from her Republican opponent. As Clinton herself said Wednesday, common sense gun regulation doesn't have to be in conflict with the 2nd Amendment at all. In fact, Clinton has proposed comprehensive background checks, closing the online loophole, and closing the gun show loophole. Clinton's proposed gun safety policies are hardly about taking guns away, and more about making sure America's kids stay safe from gun violence and accidents. How could anyone be against that, even Trump?