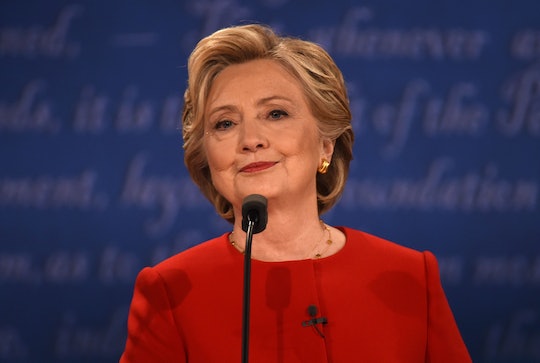 During the first presidential debate of the general election, Donald Trump accused his opponent of being too rehearsed while he was getting out and meeting people. Instead of just taking that, though, Hillary Clinton fired back with a zinger that would have been appropriately followed by a mic drop. (Alas, it was not.) See how Hillary Clinton turned an insult from Donald Trump into the best line of the night in video from the debate.

After dispensing with the niceties earlier on in the night, Trump and Clinton were both attacking each other on everything from political policies to their personal histories. In this one moment, Trump fell back on the old criticism that Clinton is too serious and isn't getting out into the public enough by saying, "You stayed home and that's OK. I've been all over." But after hearing that likely one too many times, Clinton was ready with her response to Trump:

Donald just criticized me for preparing for this debate. Know what else I prepared for? To be president.

Without time to verbally respond, Trump just rolled his eyes and shrugged his shoulders while the debate preceded. Meanwhile, many people at home seemed to cheer with Clinton for the perfect burn.

Going into the debate, CNN reported Clinton spent the previous few days hunkered down in a hotel studying for the primetime moment.

Clinton spent Friday, Saturday and Sunday night at the Doral Arrowwood, returning home past 11 p.m. every night after sessions with a tight group of aides and advisers. The late night sessions appeared to mimic the timing of Monday's debate at Hofstra University...

That wasn't out of character for the former secretary of state, who admitted to a crowd earlier this month how she prepares for big moments, "Like a lot of women, I have a tendency to over prepare... I sweat the details."

Meanwhile, Trump's campaign said he was going to just go with his gut during the debate. His spokesman Jason Miller told CNN of Clinton's strategy, "That might be something to brag about when you are getting ready to high school football but I am not sure heading into arguably the biggest presidential debate that our country has ever seen that that is something that you want to be putting out there."

During her studies, Clinton likely came across that comment — and clearly came up with the perfect rebuttal to use when it really mattered.