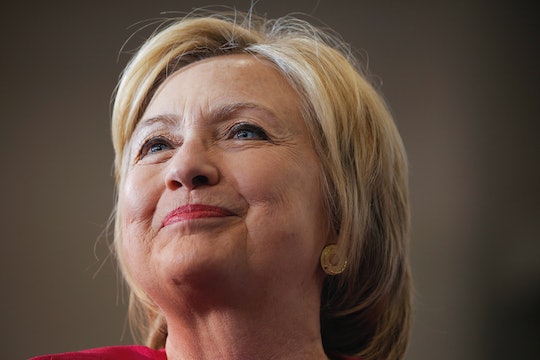 Hillary Clinton Tweets Trump’s Previous Mexico Comments Ahead Of His Visit, & It's Epic

In yet another baffling campaign move, Republican nominee Donald Trump will travel to Mexico on Wednesday to meet with Mexican President Enrique Pena Nieto — just hours before Trump is scheduled to make a major speech on immigration in Arizona. Like so many times this campaign season, it seems like Trump either can't make up his mind on what he believes, or forgets positions he's taken in the past — and the Clinton campaign is taking full advantage of his flimsy memory. Hillary Clinton tweeted all of Trump's previous Mexico comments at her campaign blog today, and it is gloriously epic. Like, "are you seeing this/you can't make this sh*t up" levels of schadenfreude. Trump's campaign did not immediately respond to Romper's request for comment regarding his previous comments on Mexico or Clinton's tweets regarding his visit.

Wednesday's visit to Mexico wouldn't be the first time that Trump appears to have completely forgotten anything that's ever previously come out of his mouth: He's recently dialed back from "ban all Muslims" to "extreme vetting of Muslims." Even his supporters have gotten frustrated with Trump softening his stance on immigration in recent weeks. But it's Clinton's list of Trump's tweets about Mexico that casts an uncomfortably blinding spotlight on his vitriol and rampant hypocrisy. And it's not a brief list, either: It showcases 63 of Trump's tweets about Mexico.

Even the Clinton campaign tweet doesn't hide its glee at highlighting Trump's written — and indisputable — record of his mounting case against Mexico and Mexican immigrants. You can practically see Clinton's campaign staff shaking their heads and rubbing their hands together in delight as they compile a seemingly exhaustive list of Trump's tweets about Mexico. Of the 63 Clinton's camp has chosen to round up, here are the 10 best of Trump's worst tweets on Mexico.

I'm pretty sure there's been plenty of uproar over 90 percent of what tumbles out of your mouth, ol' Donny boy.

This comment doesn't seem to stray too far from Trump's own speech announcing his run for president, when he called Mexicans "rapists."

This was just one of several tweets where Trump lamented about a court case of his in Mexico that seems to be going nowhere — or at least not in his favor.

I'm pretty sure Trump has never heard of the saying that you catch more flies with honey...

I won't lie: From a literary standpoint, this is a fabulous example of metaphor — strong imagery, elevated vocabulary, and, I dare say, it's even shockingly intellectual from a man who told Russia to hack his presidential rival's personal emails.

And folks wonder why Trump appeals to the alt right movement as much as he does.

Nope, Nothing Petty Here At All

Is this supposed to be like Trump's version of a political time out?

Clearly Trump was the captain of his debate team, with such cunning logical strategies as calling your opponents "dummies."

Trump wants you to know that he like, totally digs Mexico and frozen margaritas on Cinco de Mayo, but they're not allowed to come over and hang out with us.