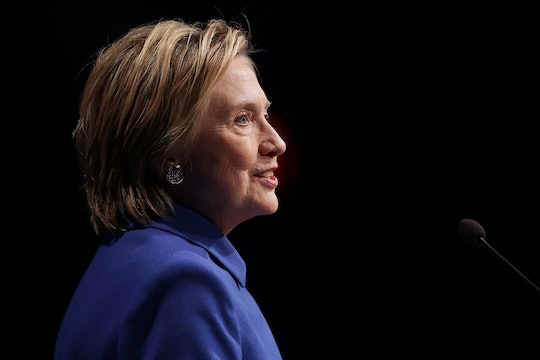 It has been eight days since it was announced that Donald Trump would be the next president of the United States and Hillary Clinton was forced to concede the victory — and the wounds are still incredibly fresh. A lot has happened this past week and many are still rightfully mourning the fact that Clinton was defeated after a long, exhausting 2016 campaign season. On Wednesday, Clinton took to the podium at an event in Washington, D.C. to deliver her first comments since her concession speech one week earlier — and Clinton's first remarks since the election were real, humanizing, and showed that supporters will overcome hardship throughout the next four years — because, as Clinton has repeated many times over, they are stronger together.

If I had just run for president of the United States and had lost the electoral vote, I probably would barricade myself in my home with my pets and ice cream for a month. But, in such trying and tense times like these during the post-election, there is no time for wallowing. This is a time for action and change, and Clinton knows it.

Despite Clinton winning the popular vote in the presidential election by over a million votes, the Electoral College deemed Trump the next president — which didn't make the results any easier to swallow. And yet, as the world continues to move on, Clinton did the same, making her first appearance since conceding in the election on Wednesday night with more graceful composure than ever. But just as the election was just as hard as her supporters, Clinton admitted that making her first appearance since the election "wasn't the easiest."

Clinton looked the very image of strength as she stood onstage at the Children's Defense Fund's "Beat The Odds" Gala, although she admitted that, on the inside, she was still feeling the post-election pain. "I will admit, coming here tonight wasn't the easiest thing for me," Clinton told the audience. "There have been a few times this past week where all I wanted to do was curl up with a good book and our dogs and never leave the house again." But thank god, Clinton did not stay home or stay put in her house — because in this moment, her inspirational words were exactly what a lot of people needed.

I know many of you are deeply disappointed about the results of this election. I am, too. More than I can express. But as I said last week, our campaign was never about one person or even one election. It was about the country we love and about doubling an America that is hopeful, inclusive, and I didn't get into public service to hold high office.

"We have work to do, and for the sake of our children and our families and our country, I ask you to stay engaged, stay engaged on every level," Clinton said. "We need you. America needs you, your energy, your ambition, your talent. That is how we get through this."

Clinton is absolutely right. During a time when an alleged white nationalist has just been named Trump's chief strategist, his Cabinet remains shaky on experience, and the future of the United States remains unknown, Clinton's supporters should not give up — especially if they know they can make a difference. Twitter's reactions to Clinton's speech show just how proud these supporters are of their former candidate and how important it is to follow her lead and not take their eyes off the overall goal.

Clinton herself has not given up on her country. "The divisions laid bare by this election run deep, but please listen to me when I say this: America is worth it," Clinton said on Wednesday night.

Clinton's first remarks since the election show that she was hit as hard as her supporters were by the stunning results of the 2016 election. But in a nation at risk of turmoil for the next four years, her supporters, like Clinton herself, ought wake up each day and continue to fight for what they believe in — it's what Clinton will be doing, anyway.