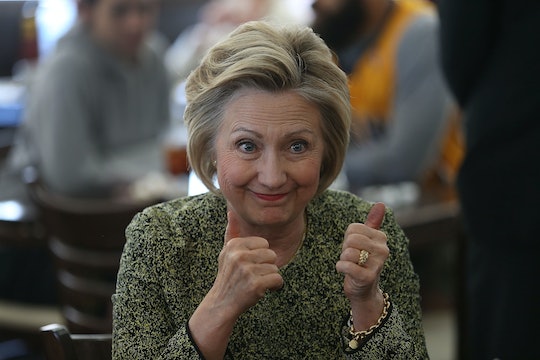 With billionaire Donald Trump’s two remaining Republican rivals officially out of the race for president, Trump has become the presumptive, near-unstoppable Republican nominee for president. While some struggled with that new political reality, Democratic frontrunner Hillary Clinton went right into attack mode, delivering two web ads that call out exactly why the prospect of a Trump presidency has so many Americans terrified. But the best part about Hillary Clinton’s new anti-Trump attack ads is that they aren’t in her words, or those of anyone on the left for that matter. In a particularly smooth move, Clinton turned to the GOP — and to Trump himself — to make the case for her. The result is pretty brutal.

Posted on Clinton’s official Twitter account and on her campaign website, the ads go straight to the harsh statements and character assessments that Trump’s GOP rivals have lobbed against him over the last year. In one video, Marco Rubio called Trump “a con artist” and “the most vulgar person to ever aspire to the presidency,” Mitt Romney called him “a phony,” and Carly Fiorina said he was “a man who seems to only feel big when he’s trying to make other people look small.” Clinton’s message is clear: the GOP is clearly united, but only in its collective distaste for Donald Trump.

And the second ad hits even harder. In a 90-second clip, the Clinton team compiled what the GOP presidential platform would entail, according to the party’s new leader. The video splices together footage of Trump on various campaign stops and in media interviews where he outlined his position on everything from immigration to gun control. There’s Trump talking about Mexican immigrants during his speech announcing his campaign for president: “They’re bringing drugs. They’re bringing guns. They’re bringing crime.” Then, a clip of the candidate talking to supporters about how to reduce school shootings: “I will get rid of gun-free zones on schools. My first day, it gets signed.” There’s footage of Trump announcing his apparent solution to addressing terrorism concerns: “A total and complete shutdown of Muslims entering the United States." And finally, who could forget the video of Trump explaining to MSNBC anchor Chris Matthews exactly what would happen under his plan to ban abortion: “You’ll go back to a position like they had where people will perhaps go to illegal places.” As for the women who still seek an abortion under the ban? “There has to be some form of punishment,” Trump said in the clip.

You cannot make this stuff up.

It’s statements like the ones in Clinton’s ads that had leading members of the Republican party in knots this week, according a New York Times report, as party leaders grappled with whether to fall in line behind the GOP’s new standard-bearer, call for him to tone down his language, or throw support behind another candidate entirely. Speaking to the Times, top Republican operative Gregory Slayton summed up the schism in the party this way:

The answer, at least for a few GOP-ers, appears to be an option few would have ever imagined: voting Democrat. Or, to be more specific, voting for Democratic frontrunner Hillary Clinton should she become the official presidential nominee. According to an article posted at Think Progress earlier this week, several high-profile Republicans have already abandoned ship. Mark Salter (former aide to Arizona Sen. John McCain) seemed to suggest that he’d be #TeamClinton come November:

So did Ben Howe, editor of the popular conservative blog RedState:

Even Steve Schmidt, architect behind McCain’s 2008 bid for president, seemed to signal that it was time to think beyond partisan lines:

Given the turmoil in the GOP — and the never-ending stream of damaging material from the presumptive nominee himself — we’ll probably continue to see ads like Clinton’s latest as election day nears. But even if the argument from the left seems like an easy one, the campaign certainly won’t be easy for Clinton. Not only will Clinton need to persuade independents to her cause, she’ll also need to win over at least some Trump supporters. And to many of those in the pro-Trump camp, the fact that their candidate is so unpopular with the party’s establishment is exactly why he’s so darn attractive.