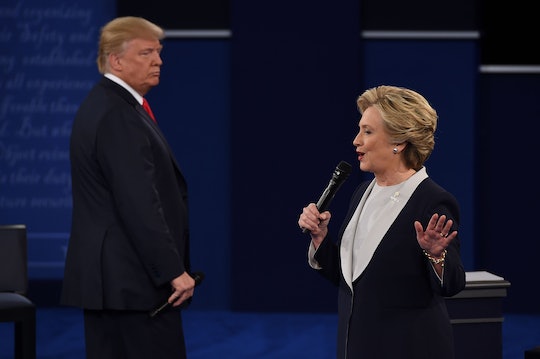 There were so many WTF moments during the 2016 election season, but a new memoir by former Secretary of State Hillary Clinton has brought one of the more troubling ones back into the spotlight, and now the world will finally hear her point of view. Headlines have been quick to seize on Clinton's characterization of Trump as a "creep" for the way he stalked around the stage at an October presidential debate in St. Louis, lurking behind her at every turn. But Clinton's reaction to Trump's intimidation was so relatable, and so disheartening, because she did what all women have been conditioned to do in the face of intimidation by men: she smiled.

In an audio excerpt obtained by MSNBC's Morning Joe, Clinton described her thoughts on the lurk heard 'round the world:

'This is not OK,' I thought. It was the second presidential debate, and Donald Trump was looming behind me. Two days before, the world heard him brag about groping women. Now, we were on a small stage, and no matter where I walked, he followed me closely, staring at me, making faces. It was incredibly uncomfortable.

Clinton chose not to call Trump out, but she still has doubts: "Maybe I have overlearned the lesson of staying calm, biting my tongue, digging my fingernails into a clenched fist, smiling all the while, determined to present a composed face to the world."

She's right; it's wasn't OK, and everyone knew it. As the world watched it happen in real time, we created memes about it. We edited Trump into horror movie posters and added the Jaws theme to the videos. But the target of Trump's intimidation tactics, the woman who was being made to feel unsafe, said nothing, because she feared that calling out his inappropriate behavior would reflect poorly on her. If that had happened to a male candidate, he might have been called weak (or worse) for not standing up to Trump. But women are expected to remain docile, lest they be labeled "shrill" or a "b*tch."

And yes, I'm about to go there, if you didn't see it coming: this is rape culture. This is why Trump felt comfortable normalizing his now-well-known hot mic interview where he jokes about grabbing women "by the p*ssy" without their consent by referring to it as "locker room talk" in a "sorry, not sorry" apology. This is why women wear fake engagement rings and invent imaginary boyfriends to fend off strangers' advances. Rejecting a man because she's not interested could be fatal; the safest defense is to pretend that she's already another man's property.

I don't blame Clinton one bit; who among us hasn't shrunk into their subway seat as men encroached on their space, or veered out of the way as a man barreled straight toward them on the sidewalk? How many have ignored an inappropriate comment from a coworker, teacher, or customer because addressing it would only make matters worse? And how many, like Clinton, are now looking back and wondering if they should have handled things differently? We went against our instinct to defend ourselves, because that's what we've been conditioned to do. Ideally, men wouldn't feel entitled to harass and intimidate women in the first place. Society needs to stop normalizing that behavior. It's time to call a creep a creep.