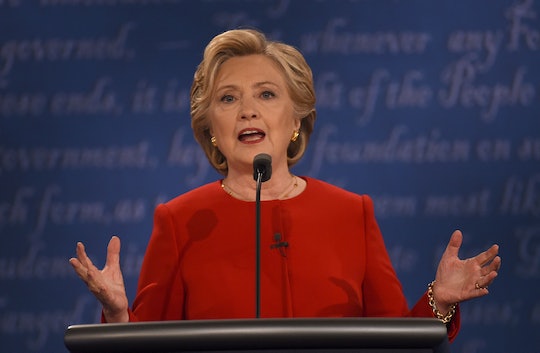 At the first presidential debate of the year, moderator Lester Holt brought up an extremely timely — and difficult — topic. But Democratic presidential nominee Hillary Clinton's response to a Black Lives Matter question was seriously on point. The former Secretary of State brought up gun regulation, problematic private prisons, and systemic racism in the justice system — and delivered a mic-drop-worthy answer that many, many Americans have been waiting on.

"Race remains a significant challenge in our country," Clinton said, according to The Wall Street Journal. "Unfortunately, race still determines too much."

Pointing to the recent deaths of black men at the hands of police in both Charlotte and Tulsa, Clinton said the country requires a criminal justice reform bill and improved training for law enforcement officers. "We've got to address the systemic racism in our criminal justice system," Clinton said.

After calling stop and frisk procedures unconstitutional, Clinton started pointing out serious problems in today's justice system — and, according to Politifact, all of her statements rang true. She pointed out that guns are the biggest cause of death among young black men and that black people are more likely to be arrested than white people (and tend to receive longer sentences). She also mentioned that, in the past, Trump was charged with housing discrimination.

It's a problem for everyone, not just police. I think, unfortunately, too many of us in our great country jump to conclusions about each other. And, therefore, I think we need all of us to be asking hard questions.

Many people chimed in online to applaud Clinton for bringing issues of race to a national stage. "Not sure how it is elsewhere," wrote Twitter user Toby Crittenden, "but the only moment when this bar went dead silent with focus was when Clinton opened her statement on racism." Actress Lena Dunham tweeted, "Clinton understands systemic racism is nuanced & needs to be tackled on every level. Trump wants to paint himself as a white (orange) savior."

Another frequent — and accurate — response to Clinton's Black Lives Matter answer was that it indicated a positive change in Americans' awareness of racial issues today. "Clinton speaking on institutional racism, implicit bias, overturning mandatory minimums on THIS stage," poet Guante wrote on Twitter, "[is a] testament to the work of ACTIVISTS."

The fact that questions regarding race and police killings were discussed in a presidential debate is absolutely a testament to the hard work of activists across the United States — and thankfully, Clinton seems to be on the same page.