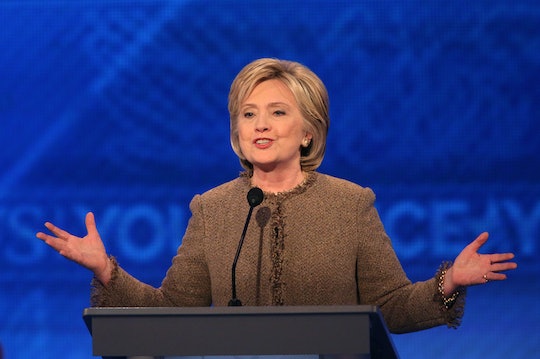 In the days leading up to the Dec. 19 Democratic debate in New Hampshire, the political headlines were dominated by news that Bernie Sanders’ staffers illegally accessed data from the Hillary Clinton campaign. That revelation led to the Democratic National Committee barring Sanders’ access to vital voter information before he threatened legal action, at which point they reached an agreement and his access was restored. It also led to the most tension between Sanders and Clinton that we’ve seen all election season, with Clinton’s campaign manager, Robby Mook, telling reporters it "was not an inadvertent glimpse into our data.”

Going into the debate, it seemed obvious that Clinton was going to issue some kind of response. But after Sanders was given the chance to explain himself, she reacted with grace.

It really is important the we go forward on this. I know that you now have your data back and there has been an agreement for independent inquiry into what did happen. Obviously we were distressed when we learned of it because we’ve worked very hard. I’ve said at the beginning of this campaign that we want to reach as many voters as possible and we have tens of thousands of volunteers doing that and entering data all the time to keep up with what people are telling us. And so, now that I think we’ve resolved your data and we’ve agreed on an independent inquiry, we should move on because I don’t think the American people are all that interested in this. I think they are more interested in what we have to say about all the big issues facing us.

That sentiment harkens back to Sanders' statement during the first Democratic debate when he was praised for putting the conversation about Clinton's use of a private email during her time as Secretary of State to bed. He said, "Enough of the emails. Let's talk about the real issues facing America." Considering how popular that comment was, it doesn't seem like a huge coincidence that Clinton took a similar stance — but kudos to her nonetheless for getting back to the issues that voters really care about.