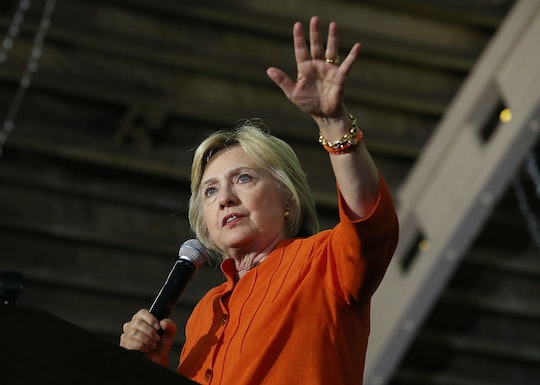 Oh look: It's another day ending in "Y" where GOP presidential candidate Donald Trump has uttered yet another unbelievable statement on the campaign trail. His staffers must be chugging bottles of Pepto in between shots of whiskey to try and keep up with Trump's near-daily mouth diarrhea at this point. The latest WTF moment from Trump? Calling President Obama a founder of the extremist terror group ISIS — and naming his presidential rival as their co-founder, like ISIS is some kind of chic Washington D.C. startup. Hillary Clinton's response to Trump's ISIS comments were not only swift, but were perhaps the most diplomatically couched way of saying "Can you f*cking believe this guy?"

Jake Sullivan, the Clinton's senior policy adviser, released a statement from the campaign on Thursday slamming Trump for the outrageousness of his accusations, labeling his comments as "trash-talking." Sullivan's statement continued:

It goes without saying that this is a false claim from a presidential candidate with an aversion to the truth an an unprecedented lack of knowledge.

The Clinton campaign's response to Trump's ISIS comments might just be the most impressive way of calling someone a "lying idiot" without having to stoop to their rival's level of banality. But the Clinton campaign statement didn't mince words either about the dangerousness of such accusations from Trump.

"What's remarkable about Trump's comments is that once again, he's echoing the talking points of Putin and our adversaries to attack American leaders and American interests," Sullivan's statement continued, noting that Trump has failed "to offer any serious plans to confront terrorism or make this country more secure."

For those of you keeping score at home: Just when you thought Trump couldn't outdo his irrationally hellbent stance on trashing the Muslim immigrant parents of a Muslim American soldier who died in combat — Trump defies the odds. Calling for "Second Amendment folks" to "do something" about Clinton and/or her potential picks to fill vacancies on the Supreme Court bench if she were to become president didn't tip the scales of "Things You Shouldn't Say Ever, Much Less During An Election" earlier this week, either. Nope: Trump just up and decided to assert that Clinton and Obama founded ISIS — which was founded in 2004 by a Jordanian-born extremist named Abu Musab al-Zarqawi — under former President George W. Bush's watch, not Obama's or Clinton's.

As Trump has shown time and time again this election cycle, he has no problem trying to drown his opponent in the mud rather than just dragging her through it — even when he's just flat out wrong. While Trump's campaign surrogates pulled the "mainstream media misunderstood him!" card after his Second Amendment gaffe, Trump himself doubled down on his ISIS comments, saying on CNBC's Squawk Box on Thursday morning that he absolutely meant what he said.

The Clinton campaign response, like many other campaign statements about Trump's comments and accusations, take the high road — as really, all election discourse should. The sad reality of this presidential election is that the Clinton campaign must issue statements like these in the first place, and recently, at such an alarming frequency.

Madame Secretary, I just don't know how you do it — but God love ya for staying level-headed in this sea of madness.